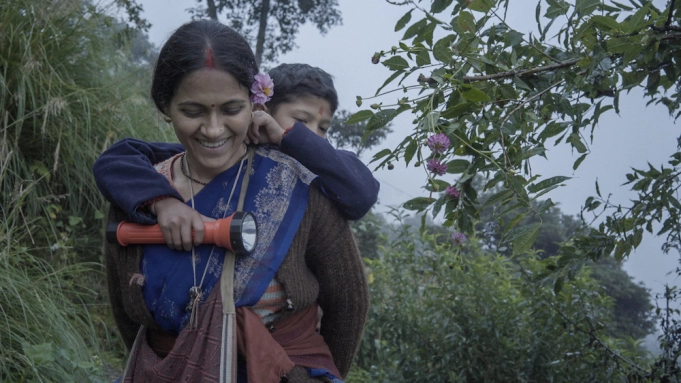 It would be hard not to be affected by Fire in the Mountains‘ dire story of one woman’s personal struggles in a Himalayan village. Embodied within her story are larger themes, clear but crafted in subtle and realistic ways, about a woman’s place in her world and the simmering conflict between traditional and modern India. Set in a beautiful area touted as the Switzerland of India for its spectacular Himalayan views, the film contrasts that natural beauty with the scarcity and hardships of its villagers.

Chandra (Vinamrata Rai) would do anything for her young son, who doesn’t walk although the doctors say his legs work just fine. She has saved up money by renting a room to tourists in their humble mountaintop home. Her goal is to get a road built up to their location so her son, Prakesh (Mayank Singh Jaira), can attend school and tourists can arrive more conveniently.

She is so single-minded she seems almost not to notice the physical burdens of her work as she carries her son up and down the mountain for doctor’s appointments, cooks, cleans and labors in the fields without breaks. She ignores her daughter’s significant academic accomplishments, focusing instead on the teen’s burgeoning flirtation with a local boy. And she compromises herself to curry favor from a local decision-maker who could greenlight the road project.

Meanwhile, Chandra’s husband, Dharam (Chandan Bisht), doesn’t seem to do much work and passes out drunk regularly. He’s convinced an ancient ceremony will bring the impoverished family better luck and his son the ability to walk. When the local guru suggests Dharam has disobeyed his ancestors’ wishes by not conducting the ceremony, and that he must take charge of his home and his wife, Dharam becomes violent. He beats Chandra up and steals her hard-earned savings.

As much as Chandra outworks and outwits her hapless husband, she is still subject to his – and other men’s – whims. But her daughter, Kanchan (Harshita Tiwari), suggests another life for women is possible in their setting. She excels at school, controls the flirtation with the local boy, outwardly explores her own sexuality through Tik Tok videos and is not intimidated by her parents nor convinced to follow in their footsteps.

Why Chandra seems to care so much more for her son feels both unfair and perhaps cultural, and her own behavior can border on cruelty. When her husband whips their daughter, there’s a glimmer of a smile on her face. Has she internalized the same gender roles that have oppressed her? Does she hold some resentment towards her daughter’s education and freedom? It’s unclear and typical of how little Chandra outwardly emotes, part of actress Rai’s understated, realistic portrayal of a resolute woman.

All the members of the family seem to have secrets, and some are easier to explain than others. No character escapes the harsh reality of writer-director Ajitpal Singh’s prying camera. The son’s motivations for what he’s hiding are perhaps the most opaque, though in light of the bullying schoolchildren surrounding him and the arduous life facing adults in the village, escape certainly seems attractive.

Scenes are often set to radio news recounting the progresses and successes of the Indian government, auguring a near future for the country as a modern “superpower” in contrast to the poverty the villagers live in. While the radio announces the government is building roads to every village in India, Chandra’s struggle shows the reality.

Dharam’s insistence on trusting a guru and an ancient ritual are juxtaposed against Chandra’s more practical efforts of saving money, greasing hands and exchanging favors. When a miracle seems to take place during the ceremony, shaping the ambiguous final scene of the film, it’s clear the ritual will be unduly credited.