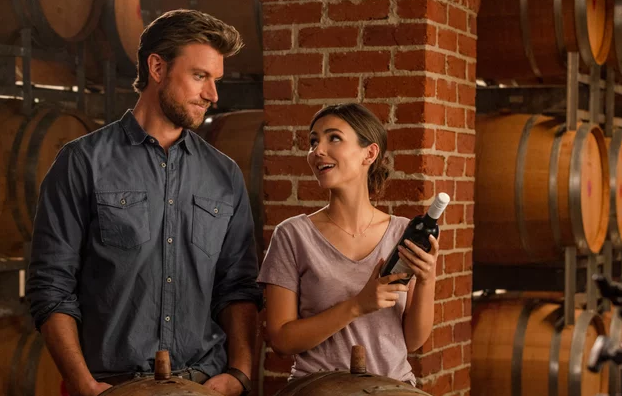 Screenwriters Hilary Galanoy and Elizabeth Hackett of the 2020 Netflix rom-com Love, Guaranteed seem to have lifted whole chunks of the plot from their 2019 Netflix rom-com, Falling Inn Love. In the latter’s trailer, a San Francisco career woman (Christina Milian) trots off to New Zealand with too-high heels and upswept hair to find the rundown inn she’s won in a contest. She meets a local goat and falls in love with a hunky blue-eyed handyman (Adam Demos), who helps her get the place in order.

A Perfect Pairing sees Lola (Victoria Justice, Afterlife of the Party), a Los Angeles wine executive with upswept hair and too-high boots, jet off to an Australian sheep ranch. Determined to build her own company, she scrambles to win the distribution rights to an exclusive wine label ahead of her former employer.

When the ranch winds up a person short, Lola offers to lend a hand to impress the winery owner. Rugged supervisor Max (Demos again) shows her the ropes, literally sweeps her off her feet to avoid a snake, and of course hides a secret that pops out in the third act.

The divorced Lola does standard city-girl-in-the-country stuff—tripping over sheep pens, spilling feed, shoveling manure—before finding her groove. Meanwhile, her dad supplies advice such as, “You pressed pause on your love life. It’s time to press play.”

Director Stuart McDonald (TV’s Crazy Ex-Girlfriend) and the camera department offer plenty of shots of the stunning countryside and adorable animals, including a baby kangaroo. As in Falling Inn Love, they also give Demos a shirtless moment for Lola to gasp over.

The ranch has a diverse supporting cast, including a woman whose girlfriend is expecting, and some cute moments as they and Lola get to know each other. Around the campfire one night, as Max strums the guitar, Lola recognizes the song and starts to sing. Max and the others encourage her, then chuckle warmly as she murmurs through a patch she doesn’t know.

Justice gives Lola indefatigable charm and energy, and she and Demos make an attractive pair, but there aren’t a lot of sparks between these two—or much conflict keeping them apart. Lola also doesn’t show any real growth. She’s more of a change agent, fixing a faulty boiler, stopping a bar fight, saving a favored ewe from the dinner table …

So, not quite perfect, but if you’re in the mood for a scenic getaway, it’ll do.