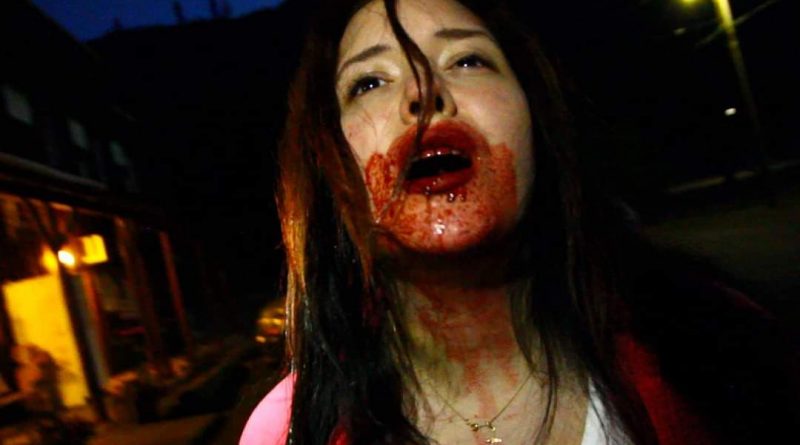 Ophiocordyceps unilateralis is one of those strange little quirks of nature that seems to have just been waiting for a horror movie to come along and snap it up as a primary point of reference. Otherwise known as the impressively named “zombie-ant fungus”, it attaches itself to the insect before taking over its system completely, leaving the ant to literally explode from the tiny little fungus-laden head of the dead insect thus ensuring its endurance as it keeps spreading its spores.

With grass roots horror stalwart Michelle Nessk at the helm both behind and in front of the camera, the found footage horror film O Unilateralis has had a perhaps similarly complex journey from its first tentative release in 2016 until today, where it is about to receive a long-overdue distribution reboot and hopefully find the broader audience it has long deserved.

Nessk plays Abigail, a quiet Christian student with little life experience who decides to go on a camping trip with a male friend from college who brings along his aggressive, sexist dickhead buddy for the ride. Unlike the bulk of found footage films, they are not consciously out to make a film, but rather decide – seeing they have a video camera with them anyway (on which the dudebro buddy seems to be happily filming himself sexually harassing Abigail from the very outset) – that making a found footage film might be something fun to do.

What they end up documenting, however, takes two dual lines of investigation. On one hand, O Unilateralis delves into the terrain of eco-horror as the film’s title comes into play. The footage of the three young people that makes up the bulk of the film is bookended by a to-camera address by a mysterious figure in a balaclava with their voice digitally altered who speaks of a government conspiracy involving an outbreak of a mysterious phenomenon that leads this figure to conclude that “fears that the human species as it currently stands is under threat”.

As they travel from stop to stop, wandering through oddly deserted towns and finding cars abandoned in the middle of the road, it becomes increasingly clear to our travelling trio that something not quite right is going on.

Even more interesting, however, is the dynamic between the three, particularly in terms of the role Abigail plays in their complex, unfolding relationships. Without giving away any spoilers – this would surely ruin a major part of what it is that makes the film such an extraordinary experience – the gender politics that casually mark so much of the film’s interactions perhaps inevitably becomes a major part of the film’s plot, rendering this film to my mind one of the very few found footage horror films to deal with sexual violence.

That so few films in this category are directed by women or genderfluid directors adds to the significance here; it’s unusual to find a found footage horror film directed by anyone but white dudes full stop, and that it takes this fascinating direction here marks it as even more unique. O Unilateralis is a solid, confident, super-low budget found footage horror film long overdue proper distribution (festivals, take note!). For fans of the subgenre it will come as a much needed breath of fresh air, Nessk proving herself once more as a force to be reckoned with.