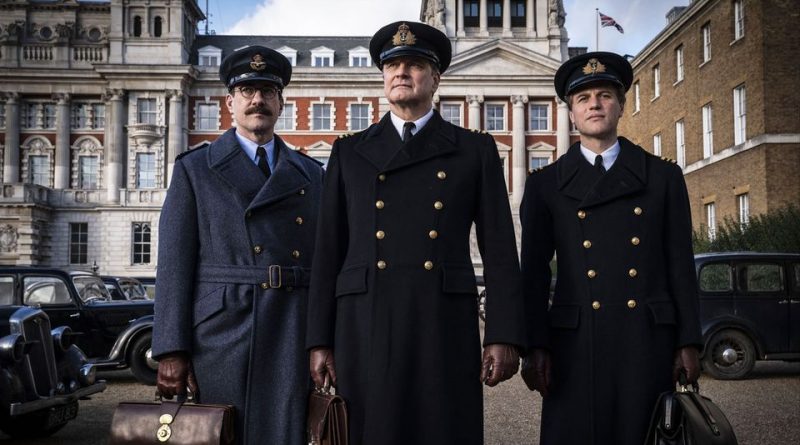 Once the Allied forces had run Field Marshall Erwin Rommel out of North Africa, Prime Minister Winston Churchill could pick Sicily or Greece to attack next. He went with Sicily, but he had to convince the Nazis otherwise. For deception, the Allies need a channel for fake news. Specifically, they require a dead body. The leaders of the impossible mission, Ewen Montagu and Charles Cholmondeley with their team spin a plausible story. They write a biography for one William Martin so detailed that the Nazis have to believe the incredible, that a drowned man carries orders citing the coming battleground as Greece. Operation Mincemeat was called originally Operation Trojan Horse, for obvious, literary reasons.

The scenes of the team’s devising Martin’s life provide some of the best writing in Michelle Ashford’s screenplay, based on Ben Macintyre’s book. However, so much of the movie’s script is exposition — for how else to explain a martial event from 70 years ago? — that it feels drowned, too. In addition, illicit romance, jealousy, and competition are pebbled in so that the film’s focus pulls from the operation itself.

The excellent cast does its best. Colin Firth, looking very square-headed, works well indeed as Montagu, the lusting plotter. Matthew Macfadyen, of Succession, plays jealous Cholmondeley. Kelly Macdonald, so fine in The Girl in the Café, plays the smart cookie on the team, and Penelope Wilton, so comforting in After Life, is excellent as the tough secretary. Johnny Flynn plays Ian Fleming and Simon Russell Beale takes on the crusty, trusty Churchill; both actors recently played in the brilliant film, The Outfit.

John Madden, who directed Shakespeare in Love, among many classics, unwisely lets the complicated plot take the lead. In the interstices, Madden adds a teletype’s plunk Law and Order style or directs Ian Fleming to clack on a typewriter. “War,” types Fleming, “is a wilderness of mirrors.” So is Operation Mincemeat. Perhaps those mirrors will lead viewers to The Man Who Never Was, the 1956 film about Operation Mincemeat.