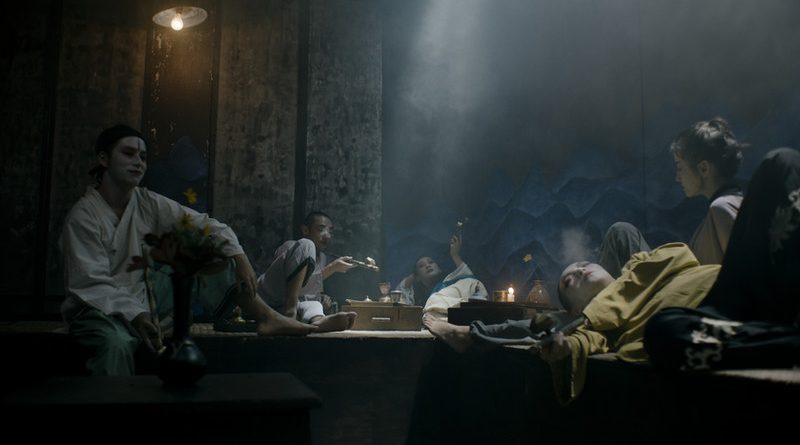 At three hours running time, director Qiu Jiongjiong’s A New Old Play demands and rewards patience with a chronicle of Chinese history from the 1920s through the 1980s. The more knowledgeable the viewer, the better for understanding the numerous cultural and historical landmarks. Strikingly unusual, the story is presented in the stylized, theatrical manner of Chinese opera.

The catalyst for this encompassing political survey begins as Demons Ox-head and Horse-face arrive as ushers from Fengdu, capital of Hell, to escort the renowned Sichuan opera troupe’s prized clown Qiu Fu to the underworld. The King of Hell wants to see his show, one developed in the 1920s when New-New Theater and Opera School adopted Qiu Fu, a seven-year-old foundling. During Qiu’s coerced journey, he will encounter old friends and revisit scenes from his fifty rewarding years on stage, punctuated by shattering disruptions. Political events in China’s twentieth century follow in chronological order: the imperialist Qing dynasty’s collapse, opium addiction, the Nationalist Party’s civil war victory, WWII, the fall of Nanking, the People’s Liberation Army, Mao’s Communist Party rule, the Great Leap Forward and the 1966 to 1976 Cultural Revolution famine, and more: in short, a country in turmoil with artists alternately rewarded, pressured, beaten, and punished.

In his director’s statement, Jiongjiong writes that his grandfather’s life inspired his tale. He adds, “I have rejected any tedious speculation, or supercilious detachment, in favor of lively, unabashed good humor and fun. . . the Dionysian spirit, the vital force, the clown in each of us. . . hovering between reality and fantasy.” In that vein, the film’s atypical stylistic choice of an entirely mannered presentation, possible unfamiliarity with China’s twentieth century upheavals, elements of tragedy and comedy, plus a lengthy running time will challenge many viewers. I recommend settling in for the pleasure of entering a very different, imaginatively presented world. In Mandarin with English subtitles.