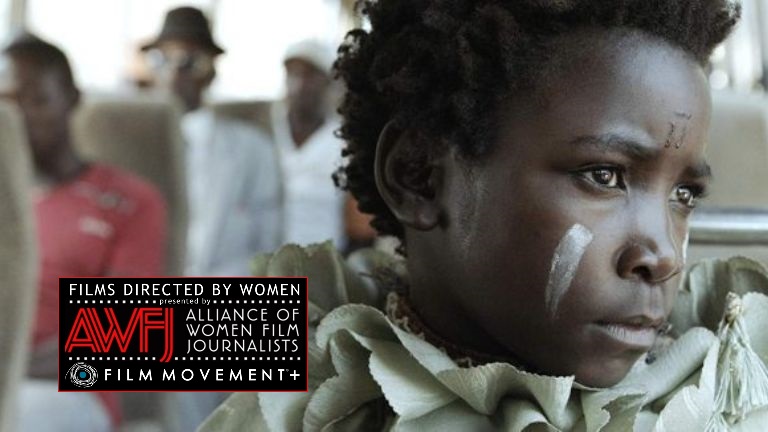 I Am Not A Witch is a stunning fantasy-like tale about naive Shula, an eight year old orphaned girl in rural Zambia, who finds her way into a village where she happens to witness a local woman fall down and spill a jug of water she was carrying. The villagers accuse Shula of witchcraft, of causing the accident. Shula, who cannot properly identify herself, nor explain her circumstances, is put on trial by the local authority, represented by a manipulative bureaucratic functionary who handles all incidents of witchcraft. When Shula is found guilty, he takes charge of her. She’s now considered property of the state and is sentenced to live at a witch camp, where she’s tethered to a large spool of ribbon and warned that if she cuts her tethering ribbon and attempts escape, she will be turned into a goat.

Put in the care of elder crones at the witch camp, Shula is indoctrinated to the superstition-laden behavior expected of her. Youngest and most noticeable of the witches, and a real ‘catch,’ she is subjected to extracurricular exploitation by the authorities who control her life. She’s put on zoo-like display for paying tourists, subjected to gawker-satisfying appearances on TV news and talk shows and put into the news-making position of judging the accused at a criminal trial she doesn’t really understand. She is also expected to induce rainfall that will end the drought that is devastating the local farms at which she, as one of the interred slave witches, is also forced to labor in the arid fields.

It all becomes harder for her when she fails to deliver on some expectations and she falls from favor with her bureaucratic handler. Young Shula is so disturbed by all of the confusing and terrifying demands made on her, she begins to think she’d be better off as a goat. When she articulates that thought, she’s told in no uncertain terms that goats are killed and eaten. Life as a witch or death as a goat. Shula’s fate hangs in the balance.

I Am Not A Witch is the beautifully crafted and profoundly provocative first feature from writer/director Rungaro Nyoni, who was born in Zambia but moved at a young age to Wales. The fascinating story she tells in the film is based on her personal observations and extensive research on witchcraft superstitions and the treatment of those accused of witchcraft in Zambia and Ghana. The film, a rich mix of smartly entertaining satire and sharp social commentary, was shot in an actual witch camp that has been in existence for some 400 years. Nyoni’s choice to cast local people in the film gives the fantasy-like scenario a feeling of alarming authenticity.

Masterfully bewitching storytelling about an orphan girl’s quest for identity, superb performances by first-time actor Maggie Mulubwa as the girl and a fine ensemble cast, exquisite cinematography that reveals nuanced emotions in close ups and captures broad sweeps of Zambia’s expansive arid landscape, and outstanding editing skills that balance satire and serious social commentary have brought I Am Not A Witch and Rungano Nyoni numerous awards. Nyoni’s cinematic style is unique and fascinating. I Am Not A Witch is a must see. And, it warrants a second watch, as well.