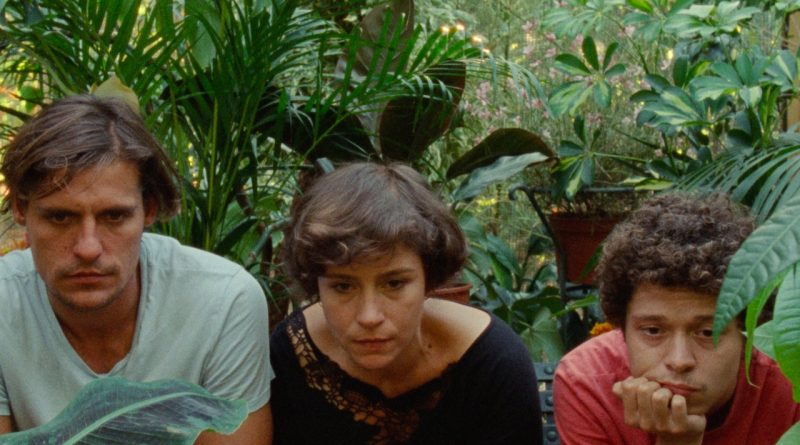 Portuguese film The Tsugua Diaries (Diários de Otsoga) provides a thought-provoking and sense-arousing time capsule of a globally unforgettable moment. Within the confines of the summer 2020 pandemic lockdown, co-directors Maureen Fazendeiro and Miguel Gomes probe concepts of storytelling and character development by recounting 22 days on a film set – backwards. The result is at times dull, realistically and symbolically so. But as an intellectual exercise, Diaries proposes some provocative ideas by deconstructing traditional notions of time, story and character.

This isn’t the first movie to tell a tale in reverse nor to make a film within a film. But the curiosity here is that there is no real story in either sphere beyond the fact that a group of people has gathered in a rural Portuguese estate to make a movie. It’s often hard to distinguish between real life and what’s being filmed, and we don’t even know there’s a movie being made until well into the tale.

The three actors (Crista Alfaiate, João Nunes Monteiro and Carloto Cotta) seem to be simply living their daily lives, taking care of the grounds and their pets. They find an old pool and clean it out, have meetings about the movie, build a butterfly garden, seemingly flirt with each other, and occasionally party. There’s not a lot of dialogue between the trio, and the conversations they do have are largely meaningless.

In one scene, a group of people gleefully ride a tractor. Later we hear a prior exchange where one of the directors proposes that scene to the other, who responds, “I’m not sure I see the point.” That sense of pointlessness parallels another conversation where the actors express frustration with the lack of direction they’re getting, and the directors explain that they’re not actually looking to create characters or a story between them. They’re very self-serious about the endeavor, but it’s hard not to suspect that it’s all a big joke too. The film’s backwards title (August – Tsugua / Otsoga – Agosto) suggests the same.

Of course, it would be more laughable if it weren’t for COVID, which becomes a scarier reality as the days count down – until we’re right at the start with a man in full hazmat suit and sanitizer spray pack explaining minute hygiene details required by state health officials and the Portuguese Film Commission. Then again, his instructions are conspicuously drowned out by a cat meowing, and things devolve during a Q&A into a debate about the breakfast provided for the crew. We detect a combination of self-aware humor, self-serious filmic commentary and undeniably grave, disorienting pandemic circumstances.

A story does slowly evolve, and provocatively so, because by being told in reverse, actions that have already taken place on screen are only eventually explained and contextualized. Also, since we don’t know at the beginning that the characters are being filmed as a part of a movie in progress, we don’t really understand who they are, what they’re doing there or why they’re living in an apparently remote, unpopulated compound. The first time we see a fourth and then more and more people, it’s surprising. The set-up could easily turn viewers off, and the movie requires patience. It could be relegated for the time being to the critical class (The New York Times critic called it her “favorite movie” of last year’s Toronto International Film Festival, and it’s played in other festivals including Cannes).

But there’s much here of appeal beyond the narrative. The film’s young cast, the starkly-sunlit, arid location and the occasional acoustic guitar melodies in the background are all pleasing. There’s also clearly some symbolism to unpack, for example in the piece of quince fruit that starts out rotten on day 22 and is gradually restored to freshly picked by day 1. (It’s hard not to think of neighboring Spaniard Victor Erice’s 1992 film painstakingly documenting a painter’s rendering of a quince tree in Dream of Light, or El Sol del Membrillo – The Quince Tree Sun.)

Closing credits inform us the film was made “in lockdown regime” between August 17 and September 10, 2020. Diaries is for all those who found those weeks of forced isolation boring and claustrophobic, and for those who felt time was standing still or had lost all meaning.