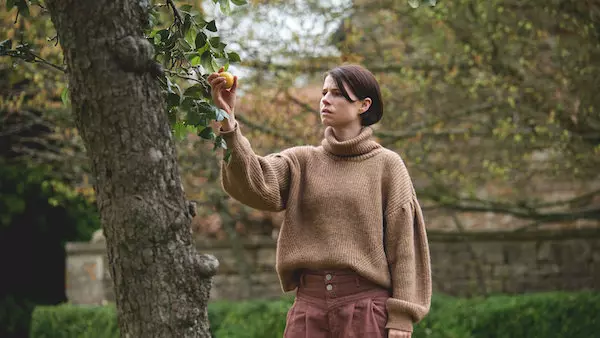 I wish I could state unequivocally that this is a film perfect for this moment in time, and perhaps it is. But not in a good way.

It may be that director Alex Garland has, well, a thing about women. Consider his screenplay for 28 Days Later (directed by Danny Boyle), a clever twist on the zombie genre that posits a pandemic of rage that infects the blood, set loose on the world by a female animal rights activist. Even the title hints at the undertones of menstrual madness. Garland later wrote a second script that was also directed by Boyle, Sunshine, a futuristic nuclear war thriller. Then there’s Ex Machina, Garland’s first directorial effort, based on his script about a narcissistic man who builds very lifelike and intelligent female robots that serve his every need. Now comes Men, an ambitious but ultimately overwrought story that strays into both body horror and folk horror territory, though much deeper into the former, alas, than the latter. Still, the excellent cast and sure-handed stylishness make this a pretty thrilling ride, at least until the last fifteen minutes.

The deliberate and tensive aesthetic of Men is apparent immediately: a short and somewhat disturbing montage, in which we see a man falling past a window, is followed by a longer scene of a young woman (Harper, played by the always-wonderful Jessie Buckley) driving her small car through the British countryside. There is a perfectly melancholy needle drop: Lesley Duncan’s plaintive “Love Song.” Harper pulls up to a grand country estate and looks around the gardens, helping herself to an apple from the tree in front of the entrance. She then meets the owner who is renting the retreat to her, Jeffrey (Rory Kinnear), a friendly but eccentric type dressed in an oilskin jacket and Wellington boots. The house is beautifully appointed, and after a somewhat awkward tour with the bumbling host, Harper settles in and has a Facetime call with her friend Riley (Gayle Rankin) in London. It’s apparent Harper is there to heal from some recent traumatic events, and she’s chosen the perfect solitary place to do it. Continue reading…

Peg Aloi was a freelance film critic for the Boston Phoenix from 1997-2013. She has taught film and media studies at Emerson College and SUNY New Paltz. She's organized conferences, edited scholarly anthologies, and been a script consultant on feature films. She is currently a freelance film and TV critic.