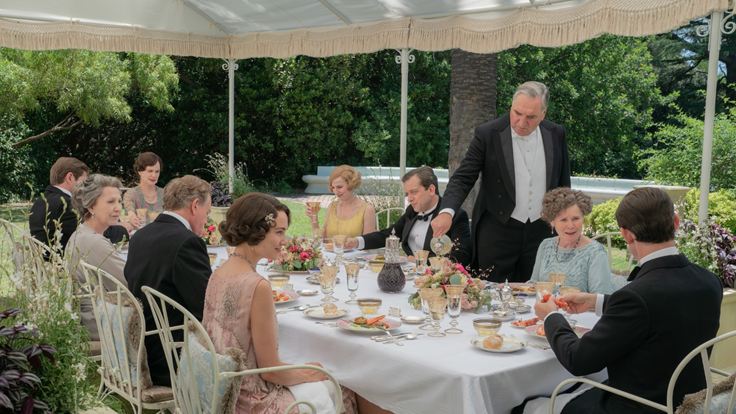 If you’re an avid fan of the PBS series and followed the franchise onto the big screen, you should relish this reunion with the inhabitants of the Crawley’s stately country house who have become so familiar. But if you’re not acquainted with their backstories, this sequel may be a bit bewildering.

After a posh wedding sequence, Dowager Countess Violet (Maggie Smith) reveals that she has inherited a villa on the French Riviera from the Marquis de Montmiral, with whom she spent an idyllic week there six decades earlier – before either was married.

Although the Marquis’ widow is resentful, his son graciously invites Lord Robert Grantham (Hugh Bonneville) and his extended family for a visit. Inevitably, the trip sparks controversy about Lady Violet’s past and the legitimacy of Robert’s title.

Meanwhile, their sojourn is perfectly timed since Lady Mary (Michelle Dockery) has agreed to allow a Hollywood director (Hugh Dancy) to film a Victorian melodrama at Downtown Abbey, reasoning that British Lion’s hefty location fee will cover necessary roof repairs. Of course, their presence excites and intrigues the servants.

“The modern world comes to Downton …”

Written once again by series creator Julian Fellowes (HBO’s The Gilded Age) and directed by Simon Curtis (Woman in Gold), the period drama, set circa 1929, veers between Yorkshire and the South of France and is fraught with emotional complications.

FYI: On the Cote d Azur, Lady Bagshaw and Mr. Carson are mistaken for a couple; off-screen, Imelda Staunton and Jim Carter have been married for years, and director Simon Curtis is married to Elizabeth McGovern.

On the Granger Gauge of 1 to 10, Downton Abbey: A New Era is a highly satisfying, sentimental 7, playing in theaters.