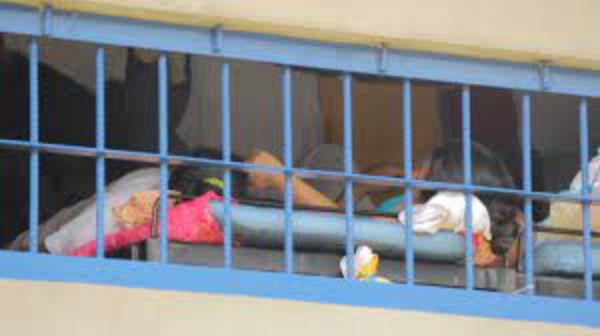 Because she lost consciousness, Teodora Vásquez doesn’t remember the details of her baby’s birth.

She remembers bleeding and calling for paramedics. Being taken to a police station and handcuffed. Waking in a hospital to learn she’d been charged with killing her baby—and later sentenced to thirty years in prison.

Hers is just one of the stories highlighted in the documentary En deuda con todas (Indebted to All Women), which explores the draconian law against abortion in El Salvador. That country’s constitution has criminalized abortion under all circumstances since 1998. This means that even women who undergo a miscarriage or have other medical complications receive charges of attempted or aggravated homicide.

At least 182 women suffering an obstetric emergency have been prosecuted and imprisoned under this law, The Guardian reported this month. Women’s rights advocates and lawyers have helped free sixty-five, including Vásquez, who served ten years, missing the childhood of her now-teenage son.

Available on YouTube, En deuda con todas (Indebted to All Women) took the Leslie J. Sacks Best Documentary Feature award at the eighth annual Women’s Voices Now Film Festival. The film should be required viewing for anyone considering such a hardline stance that ignores how much can go wrong during pregnancy and birth.

Within a brisk running time of one hour, first-time directors María Lobo and Roi Guitián guide viewers through the heart-wrenching circumstances of women living under this law for more than two decades. The argument against these women is that they did nothing to help their infants.

Some of those incarcerated say they are afraid to tell other inmates about their charges for fear of being beaten or abused. Other inmates tell them they should die because “this is unforgivable, even by God.”

It all sounds like a dystopian nightmare, but the filmmakers bring home the real-world repercussions, particularly for poorer women with limited resources. One woman lost a relative during a high-risk pregnancy that she didn’t have the choice to terminate, leaving her sons and newborn daughter without her.

An OB/GYN recalls being rushed to the hospital with a cervical pregnancy, a form of ectopic pregnancy that would have killed her. The baby girl she carried “was smarter than everyone” and had no heart rate, she says, removing any question over whether doctors should end the pregnancy and save her life.

En deuda con todas (Indebted to All Women) doesn’t delve into what specifically led to the constitutional change, only briefly mentioning the political influence of El Salvador’s Catholic and Episcopal churches. Although it focuses on women dealing with health issues, the film also notes how the law makes no exceptions for rape or sexual abuse, with statistics showing that 28% of the country’s pregnancies occur in girls ages ten to nineteen. The lone anti-abortion representative quoted in the film says that the state should “provide solutions” in these cases, such as a “protection program” to give up their babies for adoption, but is short on details.

Wherever viewers might fall on that debate, the stories in En deuda con todas (Indebted to All Women) help frame this punitive measure as a human rights issue—one especially relevant to viewers in the United States. A recent leaked U.S. Supreme Court draft opinion threatens to overturn Roe v. Wade, the 1973 decision making abortion safe and legal, and states such as Texas and Oklahoma have approved tight restrictions on this procedure.

Yet purely from a women’s health standpoint, En deuda con todas (Indebted to All Women) reveals that a unilateral ban aiming to protect life from conception destroys others in the process. The fight to decriminalize abortion when a mother’s health or life is at risk “is also a fight for life,” one national health official says. “We should never forget that.”