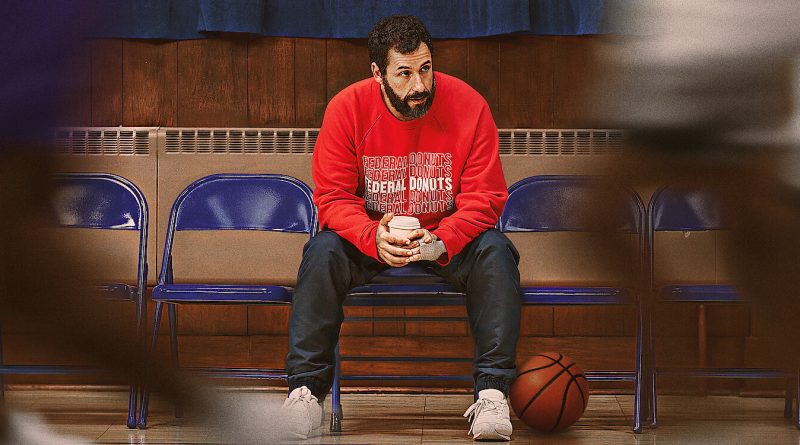 Adam Sandler is trying to pull one over on us in Hustle. The 5’9” out of shape funny man is playing a former basketball player at Temple. Really? Temple Emanu El maybe, but certainly not the university.

But Stanley Sugarman, played by Sandler, was #22, the Double Deuce, who’s career ended after an unfortunate accident stopped him from hooping and left him to forge a rather lengthy career as a scout for the Philadelphia 76ers. After years on the road, Sugarman finally was given the coveted assistant coach’s job, but just as soon as he got behind the desk, his chair was yanked out from under him and he was back on the hunt looking for that once in a lifetime player to help him get back into the NBA and make his mark.

Hustle also wants us to believe Sandler is married to Queen Latifah, as a former Temple track star turned chef, mom, and patient, supportive spouse. Juancho Hernangomez, of the Utah Jazz, plays the street baller from Spain, Bo Cruz, that becomes Sugarman’s meal ticket back to glory. He makes sure Bo knows the ropes and trains Cruz throughout Philly ala Sly Stalone’s Rocky, until he’s ready for action.

Robert Duval, as the 76ers owner, is in Hustle just long enough to leave us with the inspirational movie tagline: “Never back down.” Also making appearances are stars Ben Foster, Jaleel White and Heidi Gardner as well as a host of NBA players, coaches and owners past and present.

Hustle is fast paced, predictable and crowd pleasing. The Waterboy finally grew up to be the coach. Sandler tones down the profanity from 2019’s Uncut Gems and turns up the witty charm despite having no chemistry with Latifah.

This film is for hoop fans, but its an easy watch for anybody. My husband, Ricky gives Hustle 2 eyes open. I give it a 6.5 at the buzzer. See it in theaters now and on Netflix stating June 8th.