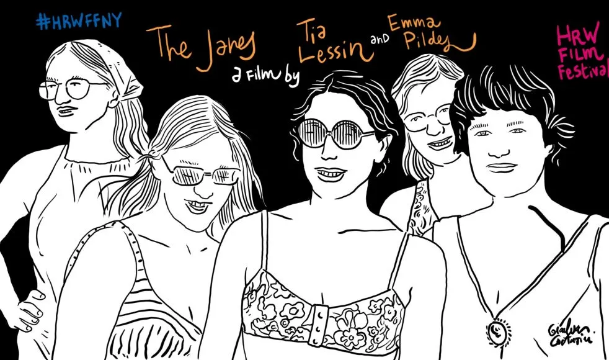 Roe v. Wade became the law of the land in 1973, but until then, women with problem pregnancies found themselves in back-alleys or at home with a coat hanger.

“We were aware that women were suffering,” remembers one of The Janes interviewed for this important document of women’s history. On the South Side of Chicago, a group of women, calling themselves by the plain-Jane name of The Janes developed a clandestine network of women helping women when men wouldn’t. “Women did awful things out of desperation,” remembered a Jane, who added, “We thought we could be of use.”

The Janes was an undertaking by “a lot of smart women,” noted an old Jane. The Janes came from the movements against the Vietnam War and for Civil Rights in the Sixties. “You couldn’t not pay attention to what was going on,” remembered a Jane. They operated under the radar of not only the Chicago mob, which profited from illegal abortions, but also of the Chicago diocese of the Roman Catholic Church and of the Illinois State Legislature. In Illinois then, even spreading information about abortion was a felony. The Janes risked their professional and personal lives for their sisters. “I was afraid all the time, but I was a warrior for justice,” said a Jane.

The Janes worked alongside Clergy Consultation Service, which had a branch in St. Louis, but Clergy Consultation helped women who could afford airfare to a legal clinic in New York. The Janes helped poor women. The organization provided safe, low-cost abortions in Chicago for about 11,000 women — one by one.

The documentary is directed by Tia Lessen (an Oscar nominee for “Trouble the Water“) and by Emma Pildes (Emmy-nominee for “Jane Fonda in Five Acts“). They juxtaposed interviews with old Janes, the memory-keepers, with photos of them as young warriors. The directors also interviewed recipients of the women’s charity, one of whom remembered bitterly that, after she was raped, the Chicago police lectured her on her promiscuity. The Janes reveals through vintage film and contemporary interviews the compassion of sisterhood.