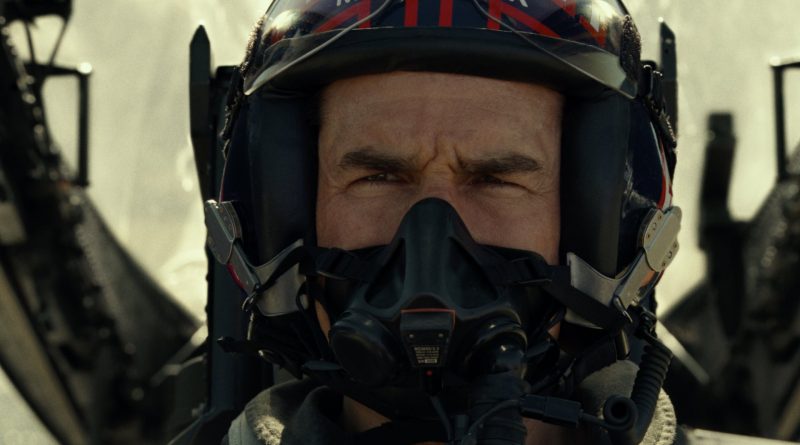 After welcoming audiences into the theater, Tom Cruise flies high in Top Gun: Maverick as a defiant, daredevil fighter pilot, pushing a plane’s limits – and that’s just the opening sequence.

Still a U.S. Navy Captain, Pete ‘Maverick’ Mitchell is ordered back to the elite training program, Top Gun Academy in San Diego, to prepare a group of rowdy hotshots for a dangerous overseas mission. They’re to destroy a uranium enrichment plant that’s been cleverly hidden in a heavily-fortified valley surrounded by steep mountains.

“It’s not the plane, it’s the pilot,” he tells them. But the assignment is an emotional minefield because one of the young aviators is ‘Rooster’ Bradshaw (Miles Teller), the resentful son of his best buddy ‘Goose’ (Anthony Edwards), and Maverick still feels guilty about his late wingman’s accidental death.

Although the rule-breaking rebel’s leadership is opposed by Senior Officer ‘Cyclone’ (Jon Hamm), he’s outranked by ailing Admiral Tom ‘Iceman’ Kazansky (Val Kilmer), who knows Maverick’s legendary unorthodox approach is the only way to get the difficult job done.

Credit Tom Cruise’s convincing performance for evoking genuine emotional involvement as Maverick tries to let go of the past. And at his insistence, there are no green screen or CGI aerial shots. Even the close-up cockpit shots are taken during real-in-flight sequences. That meant most of the cast had to undergo extensive training to withstand G-force pressures during filming.

As a result, there’s enough authentic F-18 dogfight-induced adrenaline to keep us on the edge of our seats, along with a propulsive musical score and Lady Gaga warbling “Hold My Hand.”

Full Disclosure: My son, Don Granger, is an executive producer.

On the Granger Gauge of 1 to 10, Top Gun: Maverick blasts in at Mach 10, a kinetic sequel that excels the original and is best seen in IMAX, Dolby or another premium format if that’s available.