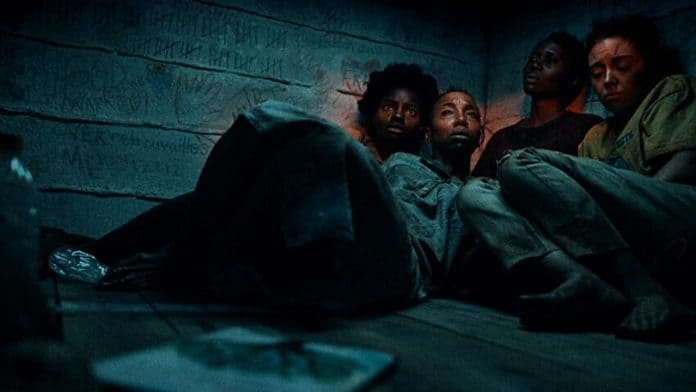 In the 1990’s Rwanda was torn apart by violence between the Hutu and Tutsi tribes that pit neighbor against neighbor in a bloody genocide. This film is based on that horrible time in the country’s history. It is quietly devastating in telling the story of four women thrown together in their struggle to stay alive amid almost incomprehensible mass slaughter.

Director Alanna Brown keeps her camera tightly focused on her four female characters as they learn more about each other and how the outside conflict impacts them all. Hidden in a tiny basement storage room under the home of Annick (Elaine Umuhire), Mutesi (Bola Koleosho), Jeanette (Charmaine Bingwa) and Peyton (Elia Cannon), an American, take refuge from the rising conflict that surrounds them. As the days drag on, the women become angry, despairing, panicked and increasingly hungry.

What could have become a static series of vignettes as each woman reveals their personal history in turn to each other is actually riveting in how each confide their stories and what they hold back, at first. The most astonishing performances are from Umuhire and Koleosho who represent the opposing tribes as they confront each other. Annick bares no animosity to Mutesi and her people but the latter is full of raging vitriol and seething bitterness. It is a tour de force of how trauma is internalized and affects one’s behavior.

Peyton as the American peace volunteer provides a heartbreaking back story and the key plot elements of the story. She was supposed to be teaching English to the young people of Rwanda so to pass the time, she starts to teach her cellmates instead. It’s touching how this becomes the means of growing understanding and strength to all of these women who have such different perspectives, even as their country devolves into carnage.

Trees of Peace will have you glued to your screen as you stay with these women and endure their captivity and well as cheer their small joys. It is a wonderfully crafted, intimate, and moving film. Don’t be surprised if you find yourself holding your breathe at the more intense scenes. Director Brown is a skilled hand at building up tension to a very satisfying climax. At the end of the film, you’ll feel as if you made four new friends in these women and that is probably the highest, most deserved compliment Trees of Peace could receive.