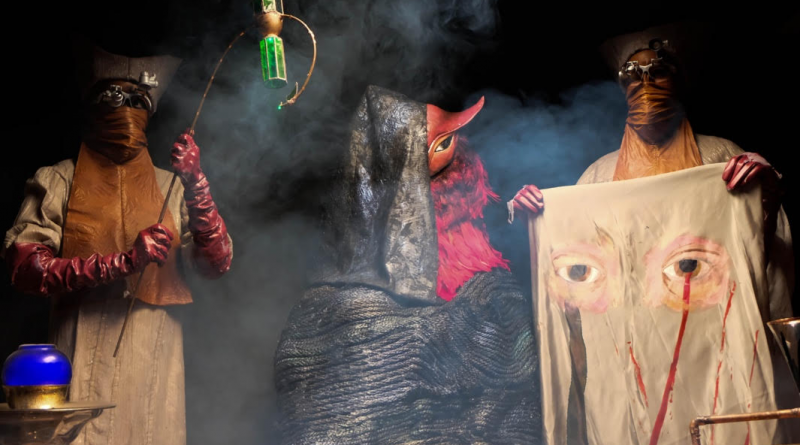 Kicking off with a quote from nothing less than the iconic Mexican surrealist artist Leonora Carrington, Travis Stevens’ A Wounded Fawn is not here to fuck around, whether you like it or not. What begins seemingly as a slick, sexy although at first perhaps superficially color-by-numbers serial killer movie rapidly turns into something altogether different, and from the outset it is probably worth acknowledging that this turn certainly won’t be for everyone. There is, surely, an alternative vision of this same film that takes a more orthodox path, eschewing the wackadoodle abstraction that the Carrington reference itself so overtly belies from the outset that would most certainly make A Wounded Fawn appeal to a wider audience. But this is, thankfully, not that film – which is great news if you are a fan of wackadoodle abstraction.

In a world populated with characters ensconced in cold elegance of the bourgeois artwank elite we meet Bruce (Josh Ruben), and he’s as busted and as dangerous a man on the inside as he is a charming and objectively foxy one on the outside. Taking her first tentative steps back into the world of intimacy after a lengthy, toxic relationship has visibly caused her significant damage, the personable Meredith (Sarah Lind) has not made the wisest of choices with Bruce as her beau of choice, a fact that we the audience are acutely aware. Travelling to Bruce’s isolated home in the country for a weekend together, things get real weird real fast. While Bruce has his own literal demons to contend with, Meredith herself seems to tap into some otherworldly knowledge that grants her prior warning that something here is not quite how it should be. Bruce may manifest the worst of nice guy toxic masculinity, but this is far from art-jock emotion-porn; in many ways, ultimately, Bruce all but fades into the background when compared to Meredith’s pure, undisguised gyno-fury which veritably breaks through time and space.

The set-up is solid, and where the film goes in its second act seems almost guaranteed to woo some, infuriate others, with very little space in between for alternate reactions. For those of us in the former camp, the aggressive turn towards painting with broad, bold strokes a psychological landscape where male violence is placed under the microscope is a deeply satisfying one. Stevens and the film’s extraordinary cinematographer Ksusha Genenfeld opt for a tonal palette where everything from Ancient Greek mythology to art history is up for grabs, both in terms of concrete references and something more poetic. If you are here for things like “plot”, “character development”, or “narrative closure” in the more traditional sense, however, make no mistake, your disappointment will be real, and indeed almost comically so in terms of how little this film ultimately cares for any of these things.

Stevens’s ambitions are unambiguously grand here, and without collaborators of the calibre of Lind and Genenfeld in particular, it can be speculated that he may not have pulled it off quite as well as he has done here. That Bruce is brought to life so compellingly by Josh Ruben – himself a filmmaker of note – feels like no accident, and certainly seems to consciously invite (perhaps ironically so) an autobiographical reading of the character as a cipher or stand-in for Stevens himself. Which begs the question: would men rather make a movie than go to therapy? If the result is A Wounded Fawn, I for one am all here for it.