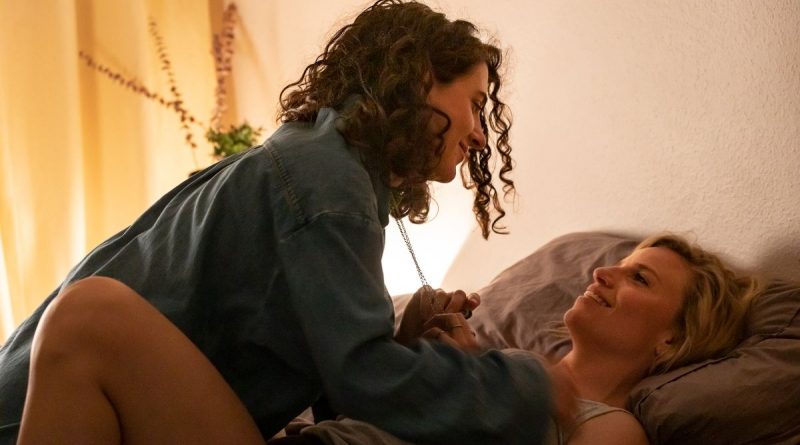 Horror romances are a rare treasure so, with the genre’s origins located firmly in gothic literature, it comes as somewhat of a surprise that there aren’t more of them. Recent contemporary masterclasses in the hybrid form include Justin Benson and Aaron Moorhead’s breathtaking 2014 film Spring and Jeremy Gardner and Christian Sella’s After Midnight from 2019, and with Attachment, Gabriel Bier Gislason internationalizes this trend with his queer Danish horror love story.

And what a love story it is. Maja was a one-hit wonder, milking an earlier success as an actress to cobble together an income enough to just get by, emotionally and professionally treading water until she meets Leah. Although her heritage is Danish, the young Jewish scholar from England has never visited the country before, and with an almost immediate mutual attraction to Maja, what begins with her not wanting to leave turns into a sudden decision for Maja to return to London with her. Here, Maja is confronted by Leah’s overbearing, overprotective and staunchly orthodox mother for reasons that, as they slowly reveal themselves to her, lead Maja to discover that her new lover comes with a little more supernatural baggage than she had bargained for.

Steeped in Jewish folklore and strengthened even further by a superb supporting cast (Leah’s uncle hear deserves a particular mention), Attachment is a perfect example of a film that is precisely aware of its own sense of scale; never too big, never too small, it is the right size film, the right size story, the right size characters and the right size emotional and visceral punch to carry the film from its first frames right through to its last. With no need for the whistles and bells of some of the horror genre’s more bombastic offerings, Attachment is a captivating, confident and deeply moving little miracle of a film.