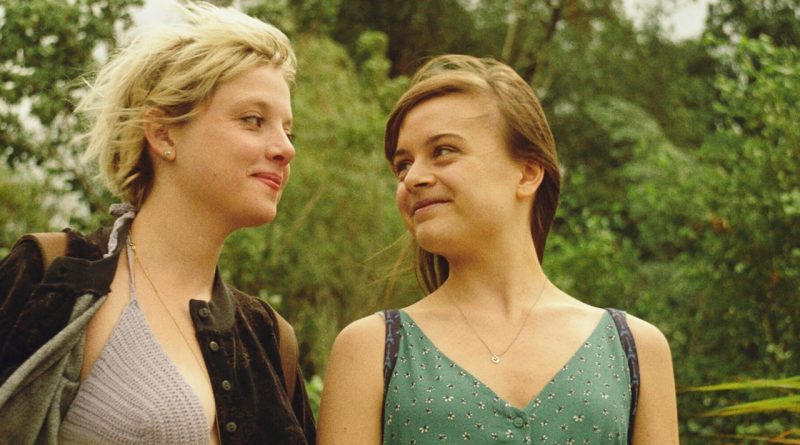 As a Berlin teenager discovering her sexuality one summer, Lena Urzendowsky gives a rich and heartfelt performance in the coming-of-age drama Cocoon.

Nora is a fourteen-year-old who sometimes narrates videos like diary entries into her smartphone. Early in Cocoon, she appears guileless until she feels the first sparks of attraction. Then we realize how guarded she is, watching her subtly transform. She tests her feelings, tentatively bolder, until she stands taller and glows with confidence, finally free. The Bavarian Film Awards in 2021 honored Urzendowsky (TV’s Dark) as Best Young Actress for her performance.

Nora keeps caterpillars until they become moths in the apartment she shares with her older sister, Jule (Lena Klenke), and her mother, Vivienne (Anja Schneider). Such symbolism might be too on-the-nose or precious for some viewers, but it works with Nora’s character. She’s the kind of girl who finds a plastic bag floating in the swimming pool magical in its transparency, then wonders if all beautiful things are as fleeting.

Nora trails Jule and Jule’s friend, Aylin (Elina Vildanova), while they pull pranks or sing into their smartphone, all sex talk and swagger. She tags behind them, eyes downcast and darting, while they head to one of many parties with the guys they know. Not all cocoons are visible.

Nora starts to emerge from hers after Aylin, while horsing around in the pool, rubs against her torso. Surprised by how she feels, she also tries to hide it, eventually sharing with a teacher over summer classes that she finds girls beautiful. The teacher tells her that she’ll feel many things at her age, which might change in a few months.

But Nora knows that won’t.

Nora finds a first love in Romy (Jella Haase, Kidnapping Stella), a girl about her sister’s age with short-cropped hair, a flirtatious smile, and the confidence of someone secure in herself. Writer-director Leonie Krippendorff (TV’s Loving Her) shows their budding relationship and Nora’s awakening through some brief nudity but also sensuality, such as when Romy introduces Nora to her hairstylist friend. After Nora gets a trim, Romy dusts the hair from her shoulders, then blows it between her fingers like dandelion seeds.

Krippendorff doesn’t just focus on Nora and Romy’s romance, though. She adds depth to Nora’s relationships with her mom and her sister. Vivienne is a partier turned barfly, good for little except nursing hangovers. Jule desperately wants their mother to clean up her act and become more involved with them, hiding her hurts when she doesn’t. She’s got a cocoon, too.

Jule and Aylin both chastise their guy friends for being too harsh on the younger Nora and want Nora to grow up too fast. They talk about diets, gossip about guys, and use their phones as cover to stare at people. Nora occasionally drops amusing observations, such as noting that when they dress “different” for a party, that always means sexy, and everyone winds up looking the same.

Natural lighting and frequent closeups give Cocoon an intimate feel. The film has an almost too leisurely pace, taking its time to find its groove. Yet that also mirrors the lazy-days summer vibe.

Jule and Aylin might not notice the change in Nora by Cocoon’s end, but thanks to Urzendowsky, we do. Like her moths testing their wings, she becomes braver and wiser, proud of how she’s grown.