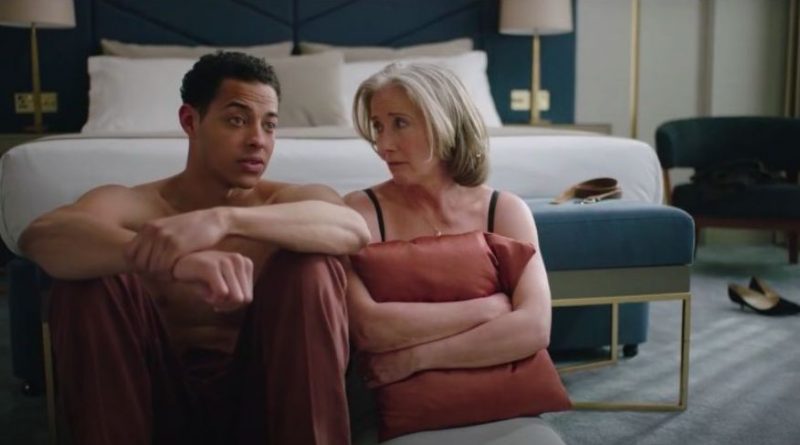 Instead of My Dinner With Andre, the deceptively simple conversation between two men that goes to deep, meaningful places, imagine My Sex With Leo. Like My Dinner With Andre, Good Luck to You, Leo Grande is full of talk (with a little sex thrown in), but becomes incredibly meaningful, layered, and ultimately life-affirming. This is all within the context of sexually unfulfilled widow ‘Nancy Stokes’ (a never better Emma Thompson) hiring sex worker ‘Leo Grande’ (up-and-coming Irish actor Daryl McCormack) to take him through the sexual paces on a list she’s put together of sexual experiences. She is a retired teacher and mother of two grown, seemingly needy children. She reveals early on that she’s has never had an orgasm. He presents himself as a professional with a job to do, a job he does well. Nearly the entire film takes place in one hotel room, and through their interactions and intimate conversations they are both changed in profound and fundamental ways.

Writer Katy Brand built the screenplay initially from an idea of a woman about to enter a room, with no idea what would be on the other side. Her curiosity led her from that to a 60-page screenplay, which she then showed to friend Thompson, because in her head, she only ever heard Thompson as the voice of Nancy. Thompson was adamant it had to be made, and quickly attached herself to the project. They approached director Sophie Hyde, who was drawn to the idea of just two people in a room, and the many places that could go. She said, “It felt completely irresistible, the idea of a woman exploring pleasure, someone who maybe hasn’t done that before.” They had 5 days of rehearsal, and shot the film in 19 days. It’s clear that rehearsal time created a powerful level of trust between performers Thompson and McCormack. There is a push and pull between intimacy and the instinct of self-preservation felt in their conversations, which demand an increasing level of real introspection.

Watching the movie is very enjoyable, but it also provokes both thought and emotion. For many viewers, especially women over 40 who have never seen themselves onscreen in this way, it demands self-examination. Emma takes the wheel on this journey of exploration so we don’t have to, and the results are cathartic and very satisfying. Still, so many questions pop up. Are we able to accept ourselves as we are? How much do we let judgment of ourselves and others get in the way of our joy? As women, how much do we let expectation and societal perception drive our lives? If we want more, are we deserving and willing to go get it at the risk of dramatic change, or is it just safer to make peace with who we are now, even if we aren’t happy?

This is not a story that is told from the perspective or with the visual language of the patriarchal gaze. As a result, the path taken by the film, and the way elements of the story are resolved are so much more empowering. From the very beginning, Nancy has taken control of her own experience, and even through her fear and a number of mistakes, she continues to move forward on her own terms. Hooray to Brand and Hyde for repeatedly subverting expectation!

There is a scene that has gotten a lot of publicity, which itself says a lot about why we need more films centering an older woman seeking joy and self acceptance. Emma herself explained why she felt the subject matter and story is so important, when referencing that moment, when her character looks at herself naked in the mirror in a completely accepting and non-judgmental way. “I found it fantastically hard. Probably the hardest thing I’ve ever done and than tells the whole story of my life as a woman surrounded by impossible demands and images and never being able to do that. That’s the great tragedy of the female body in the 20th and 21st centuries, and it’s a narrative that we absolutely have to change.”

Good Luck to You, Leo Grande is a rare example of writing, direction, and performance in perfect balance, that gel together into something even more than the sum of its parts. Though certainly a fun film to experience in the moment, it will be one that many viewers will be appreciated more and more in retrospect. The first half hour feels like the slow escalation of what becomes an emotional rollercoaster, but like Nancy, it’s best to just put your hands up and enjoy the ride.

EDITOR’S NOTE: This review of Good Luck to You, Leo Grande was originally published on January 25, 2022, when the film screened at Sundance Film Festival.