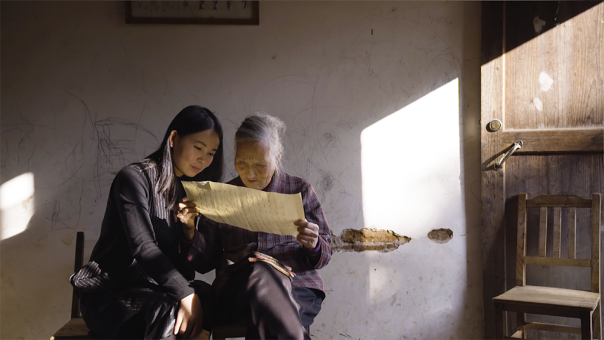 As a city dweller, I am always surprised and delighted by how seeds that have landed in a crack in the wall-to-wall concrete manage to sprout, take root, and push their stems and leaves toward the sun. In their very moving documentary, Hidden Letters, directors Violet Du Feng and Qing Zhao show how generations of Chinese women found cracks in their oppressive, patriarchal society and created a way to find a small ray of sunshine in an otherwise bleak existence.

Their strategy? Nushu, a private language they invented to write letters to each other to share their pain and gain comfort in communion. This sung and written language is understood by very few people in China today, so Du Feng and Zhao focus on how a handful of dedicated souls are trying to keep nushu alive as more than an artifact confined to a museum.

Hu Xin, a young woman from the countryside, practices nushu under the guidance of He Yanxin, an elderly woman who is one of the last living nushu masters. Hu is divorced from her first love, a man who treated her badly and whose desire for a son compelled Hu to abort the girl fetus she was carrying. Her pain and loneliness are palpable, and her devotion to nushu and He are the lifeline she needs to endure her losses as she creates nushu poems and teaches the delicate calligraphy of the language to others.

Simu is a singer who performs nushu songs for small audiences. She says that although nushu is about pain and sadness, people like to hear happy songs. Her repertoire leans on upbeat music regardless of the lyrics; since most people don’t understand what she’s singing, they never touch the spirit of nushu.

Du Feng and Zhao critique the surge of capitalist values in China, as men try to find ways to monetize nushu. Their specious rationale for using the delicate nushu characters on everything from children’s toys to men’s clothing (an abomination if ever there was one) is that without marketing to the wider society, nushu will die. One hapless entrepreneur creates an app that translates Mandarin into nushu and tries to sell it for the equivalent of $300 per smartphone. The people who come to his demonstration say they can’t read nushu, so what good would the app be to them. Indeed, perhaps the only people who could benefit from this app would be a small number of nushu readers and spies encoding messages.

In modern China, women have many more options than those of previous generations. Thus, the need for nushu has waned. Nonetheless, modern Chinese women still face difficult choices and ingrained attitudes that have them searching for ways to stand up to men and be their authentic selves. Simu, who is engaged, learns that her husband-to-be expects her to work two jobs so they can afford to buy a house where he can ensconce his widowed mother. He considers nushu to be a hobby she should give up in favor of paying employment. When she seeks advice from other women about her dilemma, it’s easy to see how similar their woes are to those that gave rise to nushu.

The cinematography by Tiebin Feng and Wei Gao is gorgeous, with drone shots of village roofs mixing with close-ups of the topography of He’s deeply lined face. Feng and Gao establish a rhythm for the film that conjures a nushu poem itself.

It’s hard to know whether the language of nushu will survive; clearly, its soul is in peril as men intrude with their crass money-making schemes. Fortunately, we have Hidden Letters to help us remember the creativity to be found in women’s struggle for survival.