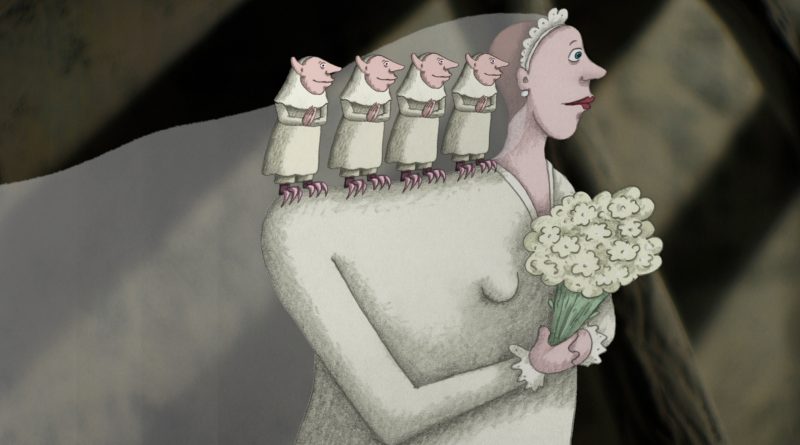 If there is one thing that is almost universal to the human experience, it’s marriage. Every culture on the planet has some form of marriage, and from an early age, every person in those cultures gets certain messages about it that form a life script into which they are expected to pour their dreams, desires, hopes, and efforts. Especially among women—the traditional keepers of hearth and home—marriage can be seen, in the words of Stephen Sondheim, as “the pinnacle of life.”

Of course, Sondheim was a supreme ironist, and in her own way, Signe Baumane, the Latvian animator and director of My Love Affair with Marriage, is, too. In this, her second feature film, Baumane offers a loosely autobiographical accounting of the life and loves of Zelma (voice of Dagmara Dominczyk), a Latvian artist who finds that her romantic programming and the biochemical workings of her body conspire against her long-term marital happiness.

Baumane starts in Zelma’s girlhood, when she experiences her first crush. Unfortunately, she learns that her combative behavior is not what boys want. Her first sexual experience with an older artist (Stephen Lang) acquaints her with the lies men tell. When she meets and marries her first husband, Sergei (Cameron Monaghan), she experiences psychological abuse that eventually turns physical. Her second marriage to Swedish artist Bo (Stephen Lang) sours when she discovers he is a crossdresser.

On this bare outline of a plot, Baumane hangs amazing, amusing images and periodic musical numbers sung by three Mythology Sirens (the Trio Limonāde: Uluta Alsberga, Ieva Katkovska, and Kristine Pastare), who spell out the cultural myths preying upon Zelma. The myths she sends up include the existence of soulmates, a wife’s ability and duty to change her mate, and the power of children to save a marriage. The music and lyrics by Kristian Sensini and Baumane, respectively, are excellent and very entertaining.

Her greatest invention is the introduction of Biology (voice of Michele Pawk). A strangely shaped combination of neuron and organ, Biology enters the story when Zelma starts to experience physical maturation and romantic emotions. A diagram of the uterus is shown to explain the hows and whys of menstruation when Zelma gets her first period. Hormones and various glands and brain centers are discussed when Biology explains what happens to Zelma when she falls in love. Outwardly, we see how these reactions affect Zelma. For example, when Sergei starts to isolate her from her friends, she takes a pair of rose-rimmed glasses from him and sees that his criticisms of her friends are absolutely right.

The animation is brilliant—a combination of traditional cel drawings and built decors and props. Baumane’s acute observations of human movement and shorthanded explanations of Zelma’s moods (turning into a cat with her claws out when angry) move us through the emotional ups and downs of a story with which most of us will be able to identify.

The final message of the film is that the best way to go through life is being true to oneself. Baumane makes the bumpy road to that realization an entertaining, thoughtful, and informative one.