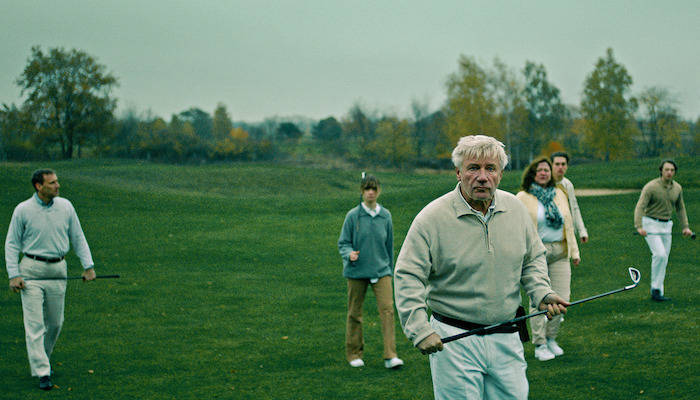 Paranoia and tribalism reign supreme in writer/director Natalia Sinelnikova’s debut feature We Might As Well Be Dead, which had its world premiere at the Berlinale and was first shown stateside at Tribeca. Dystopian in the sort of vague way that comes from not knowing what the hell has happened to the outside world, the story begins with well-heeled parents and their young son nearly running through a gorgeous tree-filled landscape, with dad wielding an ax. Carol of the Bells is playing, as they tramp towards the wrought-iron gate entrance to an insular, highly-selective community. What’s “out there” that is so terrifying that they need to escape? We’ll never know. That’s part of the tension in this satire about how fear is leading to chosen isolation, elitism, and a general inclination to cocoon with the like-minded, rather than consider alternate points of view.

Ioana Iacob stars as hybrid of security guard and concierge Anna, who works and lives at a high-rise apartment that houses only those chosen few who get approved by the community. It seems like there are only dozens of tenants, rather than the hundreds that could be housed there. The beautiful golf course is perfectly manicured but never used, as is the luxurious indoor pool.

Anna goes around solving issues, announcing the day’s weather, and showing prospective tenants the empty apartments for which they may or may not be lucky enough to qualify. Meanwhile, Anna’s daughter Iris (Pola Geiger) has barricaded herself in their bathroom, believing she has the evil eye and might be responsible for the disappearance of a one of the resident’s dog. This disappearance is the beginning of a rapid devolution of the tenuous trust tenants have of each other, and things get ugly.

That we don’t know what these folks are trying to escape might reduce some of the stakes for viewers, but it shouldn’t be a deal breaker in terms of enjoying the film, because the vagueness of an outside threat better symbolizes the paranoia of the unknown and xenophobia that have been fomented by politicians across the world in recent years. We Might As Well Be Dead leverages that dread to great effect, showing a promising start to Sinelnikiva’s career.