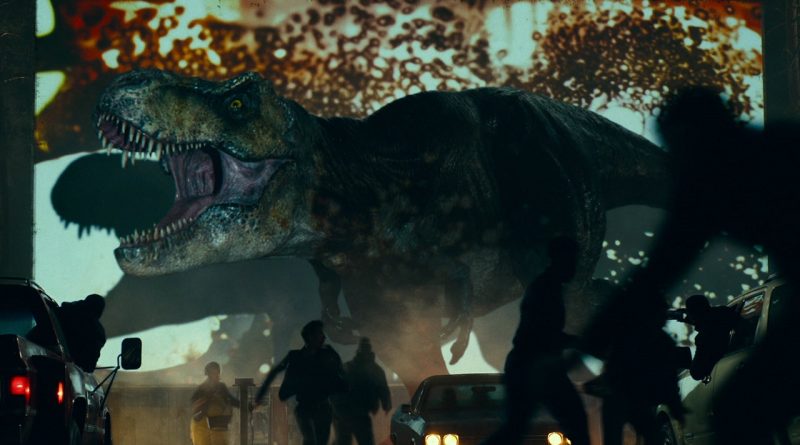 Jurassic World Dominion is the third installment of the latest regenerated dinosaur trilogy and the sixth in the Jurassic Park franchise, but it probably won’t be the final film as the series will most likely continue with a new storyline in the future. Big money making monsters don’t go quietly into the night.

Jurassic World Dominion takes place four years after 2018’s Fallen Kingdom and dinosaurs are now co-existing with humans…on cattle ranches, in National parks and neighborhood parks, along railroad tracks, nesting on tall skyscrapers and in the self checkout line at Walmart. There’s even a Dangerous Species Division of the CIA. But can mankind retain supremacy while living amongst these overly large lizards? Or will the evil mad scientist, Lewis Dodgson, return to disrupt the world order by attempting to control the Earth’s food supply with engineered giant locusts? Will our only hope be to merge the original cast of Jurassic Park with the cast of Jurassic World to bring a fulfilling conclusion to the trilogies? All these questions and more will be answered in two hours and 20 minutes of PG 13 adventures of the scaly kind.

The good: double the dinosaurs, plenty of action, nostalgia, more snarky Jeff Goldblum, and strong and smart female characters that are the equal of men.
The not so good: multiple meh storylines, cheesy acting, and not enough people get eaten. You know that’s what the public really wants.

Jurassic World Dominion is Mission Impossible with Indiana Jones, Jason Bourne and any Liam Neeson movie rolled into one…with dinosaurs. Loose ends with be tied and fans will be satisfied, but none of these sequels can compare to the original 1995 film. My husband, Ricky, gives Jurassic World Dominion 1 1/2 eyes open. I give it a 6 out of 10. It’s not Dino-mite, but it won’t blow up in your face either.