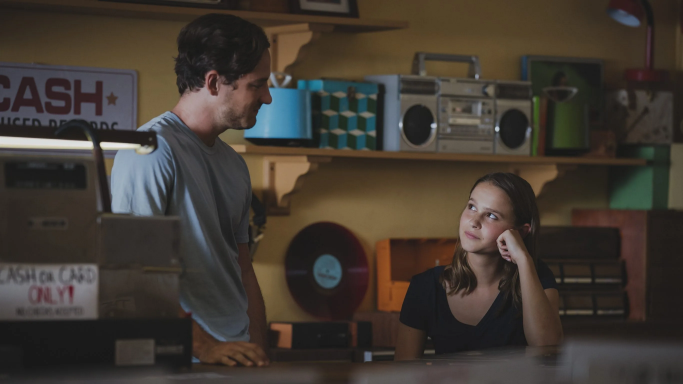 Writer/director Josh Boone has a way with romantic stories that pull at the heart strings while never veering into the saccharin and while he’s not credited as either the writer or director of Press Play – the new romantic drama being released theatrically, as well as on digital and VOD June 24 – the concept did spring from his brain, but he was stuck, unable to get beyond the concept. Enter the writing team of Greg Björkman and James Bachelor; the pair took Boone’s concept and found their way through the story which was then directed by Björkman.

The story of a couple who find love only for it to be “paused” by trauma, Press Play spans the gamut of emotions, and is kept wonderfully grounded by Lewis Pullman and Clara Rugaard, a pair of up-and-coming stars who breathe life into Harrison and Laura respectively.

Björkman recently shared some insights into his feature film debut, including his unconventional break into the industry, working with a writing partner, and finding the perfect cast to bring the story to life.

Marina Antunes: How did you come to work with Josh Boone and how did this particular project come to you?

Greg Björkman: Like most industry stories about how you got your start, mine is definitely strange. I was working in music videos at the time and I was also going to school. I took an editing class and at the end of it, the professor asked me for my resume – it was a really crappy resume. That got sent to another editor, John Axelrad who cut We Own the Night and Ad Astra. He forwarded my resume to Robb Sullivan who is Josh Boone’s editor. So I was passed around a little bit and eventually ended up meeting Josh, Robb, and Matt [Rundell] in editorial for Josh’s first film.

At one point we were talking about music specifically and he paused and was like “I have this idea, but I’ve never been really able to fix it. If you can fix it, you can go make it.” I was like, oh, this is a great opportunity. I’m gonna see what I can do with this. And then I sat on it for a very long time.

It took a few years. He gave it to me in I think it was 2012 or 2011 and James and I didn’t start writing it until 2016. It took a long time for me to go through various life experiences and various relationships to get to the point of writing it.

James and I got to know each other really well writing it and it was always fun to find somebody that you align with and are close enough with where you know what they’re thinking or you know how they think so you kind of almost bait them into thinking a certain way so that they can help you. James did the same thing to me. The metaphor I like to use is that having a writing partner is like being two balloons that are tied to the same string and wrapped around a pulley. One balloon gets to go all the way up to the sky while the other one stays grounded and then you trade places.

MA: What does that look like in a practical sense when you’re writing? Do you write together, do you write separately and come together afterwards?

GB: When we wrote this, we wrote together for the most part. We would switch off who is in front of the computer. That’s how it would work because there’s certain ways that you can phrase sentences that you want to have control rather than just spitballing an idea. So someone has the ability to write down the thoughts and then someone else is kind of thinking. We almost have this brainstorm opportunity where one person is being the balloon that’s all the way up in the sky and the other one has to corral that onto the page. That’s kind of what we did which was really nice. And James is a fantastic first pass writer – I’m okay. Then we have a conversation and that’s where the fun stuff begins.

MA: What was it about the original concept that was so difficult to crack that Josh couldn’t do it and it took you another six years to actually start writing and getting that ready to shoot?

GB: The movies that I’ve worked on – Suck in Love, The Fault in Our Stars – those provided insight into how to create the movie. I think the most difficult thing for me to wrap my mind around was the time travel and being able to spitball with somebody about what the rules should be. I needed James.

If I try to write a time travel movie by myself, I struggled to because it’s like “is this a good idea?” And then you start talking to the wall and you’re like, “what do you think?” It works to some degree for some people but I think it’s really, really nice to have a sounding board and someone to bounce ideas off of and that’s what James and I were to each other.

MA: The casting is so pitch perfect. The chemistry is there from the beginning. How hard was it to cast the film and did you know right away that these were your leads? GB: When you meet somebody, you know in the first 30 seconds whether or not they’re right for a role, but you can get to know them and then they reveal things to you that aid in your decision. But when I met Clara I had just seen I Am Mother on Netflix and she was a star in that movie. She was untapped. It was almost like a blessing: here’s this gift, someone that is incredible at what they do and hasn’t blown up yet. When I met with her we talked about her character over Skype and there were just these like sparks in her eyes when I was describing who Laura was and then giving examples and expanding on thoughts. Each time her eyes were wider and wider and wider. You could see that she wanted this role. I guess enthusiasm is everything, but she’s also a really great actor. She’s phenomenal.

MA: The music is such an important and key player in the film. Did you have a playlist to begin with, did that shift, did you incorporate music together as a team while working with the cast?

GB: When we started writing the script, I wanted to write songs into the movie. We wrote a bunch of different songs into the movie, some of them which survived and some didn’t. I’m very happy to say that Father John Misty’s cover of the Flaming Lips was in the original draft. Robin Kester’s “Day is Done” was in the original draft. Both of those were finds on the internet. I just stumbled on Father John Misty’s cover on YouTube and Robin’s song on Reddit. Writing a music heavy movie, knowing the importance of how each of these songs is going to have to fit into multiple scenes… we did write them into the script in order to make sure that we were doing the scenes justice.

On top of that, we would also have to think about the arc of their mix tape because you can’t go from Nelly to Iron and Wine; that wouldn’t work. You would have to pick a song and a genre and stick with it. But as far as music on set, there were opportunities for showing the emotional impact of what this scene is supposed to feel like by showing an actor a song. For instance, one of the songs that was in the script that made it all the way to the final was the song in the record store where Cooper and Laura are chatting at the end of the movie. And that song is a very powerful song. I shared it with Danny [Glover] before we filmed it and he listened to it three times and I told him, and this is a true story, that the composer of the song and the singer in the song met for the first time when they made a movie together and recorded that song together. Then they were married for 58 years. It’s a hugely powerful song. It’s “Oh My Love” by Riz Ortolani. It’s one of my favorites and that’s probably one of my favorite moments in the movie.

MA: What was the hardest thing to shoot?

GB: The most difficult? I feel like time is always going to be the enemy for anything but the most difficult thing I think was maybe having 20 minutes to do a sunset scene on back-to-back days. That’s incredibly hard to do. Huge props to Luca [Del Puppo] and Dennis [Dwyer] for being able to film that in such a fast way that we were able to get both scenes done so quickly. So that was a challenge, but it wasn’t hard.

MA: What are you working on next?

GB: I’m looking for a studio project currently, but there’s always time to develop your own stuff so I’ve been writing a couple things. There is a possibility of maybe doing a sequel if everybody likes this one so I’ve been chatting with James about that as well.