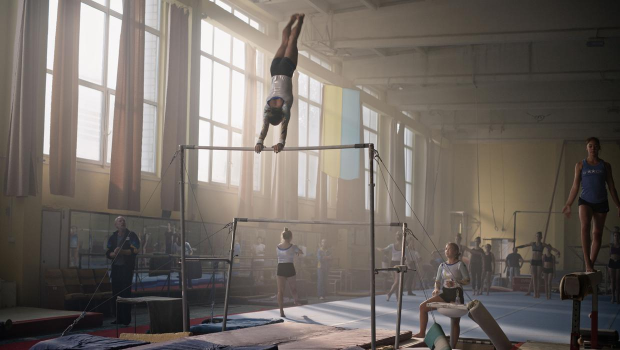 The Ukrainian gymnast drama Olga, which dazzled at Cannes, taking the SACD Award for best screenplay at the 60th Semaine de la Critique, part of the Cannes Film Festival, is timely and highly resonates in the portrayal of complicated mother-daughter relationships and female friendships overall.
Director Elie Grappe has perfectly encapsulated major themes around a young Ukrainian woman whose ambition and talent have propelled her into the elite strata of European gymnasts. The 2013 Ukrainian uprising serves as the heartbeat backdrop to her journey, ending in 2020 by the final scene.

However, it is the titular character Olga, played by former Ukrainian National Team gymnast Anastasia Budiashkina in her first film role, who exceeds expectations and delivers an award-worthy performance. Produced by Tom Dercourt and Jean-Marc Fröhle, the story of Olga shows how hard it is to grow up and survive a repressive government where one slip of a word can have draconian effects on freedom and even one’s life.

The film weaves several concurrent stories as Olga prepares for the European Championships. Her mother is put in harm’s way by her journalistic endeavors reporting on the dictator Yanukovich, and Olga is sent away to Switzerland—her late father’s homeland—in a bid to keep her safe during a time of violent upheaval in her hometown of Kyiv during the Maidan Revolution. Olga’s deep friendships with soulful Sasha (Sabrina Rubtsova) and others put the politics of this intense sport into play, as her former coach goes with Russia, and Olga now competes against her lifelong friends. Olga is lonely and adrift in a country that will accept her as a resident if she chooses. She finds that her father’s family, especially her grandfather (Roger Jendly), harbors a deep resentment towards her mother, who took him away from Switzerland. Olga is unmoored save for her inner resolve to do nothing but practice, run and exercise to be the best athlete she can be. Her solitary nature, lack of finesse with the French and German language, and unwavering dedication to training have put her peers on the Swiss team off of befriending her.

The film opens in 2013 with Olga and her lifelong pals working hard in a dingy Ukraine gym as she fights to perfect her “Jaeger” move on the uneven parallel bars on the bars with a demanding and seemingly haunted coach Vassily (Aleksandr Mavrits), who later leaves to join and train a Russian team. He cautions her to take it easy and work up to this tricky move, but she barrels ahead. Unfortunately, Olga’s mother is a hard-working journalist who has made a powerful enemy in Yanukovych. A near-death hit from some nefarious faction against her mother has Olga sent away to Switzerland to finish her training for the coming Euro competition, a precursor to the Olympics. Olga is boarded with a French-speaking couple who look out for her as she makes her way with her new team while besieged almost daily by bad news turning worse from her home.

The action scenes are authentic. As you watch Olga, the expertise of DP Lucie Baudinaud captures these athletes’ death-defying grace and athleticism. This mesmerizing ballet of physical prowess will peel away for a split second as the realization of how different life is for those living under a government that can control you with the threat of violence, or worse, will make you grateful you are where you are. Gymnasts train at the well-funded gyms of Magglingen, where the Swiss Olympic team trains, and now with Olga. She and her peers effortlessly churned out aerial and floor exercises that looked so easy despite the years and years of training they all undertook. The constant backflips and standing on hands are normal activities done constantly by these top athletes. Grappe’s eye captures the intimate psychological aspects of all their crises, grit, failures, and wins with such stunning clarity you feel at times this could be a documentary. This exotic world of the elite athlete and the ladder they climb to the gold ring—as in Olga’s case—the Olympics shows how life is for someone who eats, breathes, and lives for the competition. It also accurately indicates how fragile the emotional state can be for these teenage athletes, especially with the underlying and extenuating circumstances of their personal lives and journeys to get to these hallowed arenas where stars, and futures, are made. Breaking points exist, and the tug of the homeland and the despair of not knowing the outcome or future will also come into play here. All of it besets Olga.

This film is a deeply personal look at the value of cultivating the survivor instinct that dwells in all of us. Olga may or may not get what she thinks she wants, but we feel at the end of her story’s journey in 2020, and of course, before all the hellish coming attractions for Ukraine, that Olga is where she needs to be.