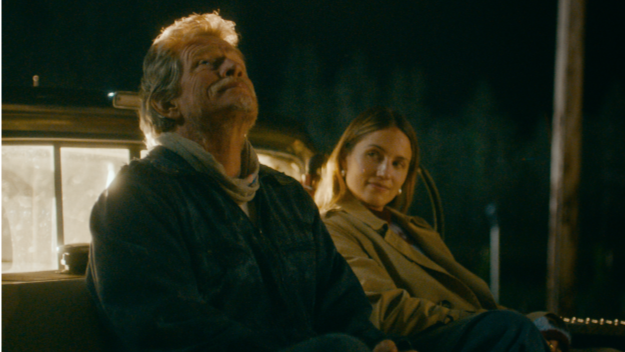 Tribeca 2022 brought us a myriad of beautifully written narratives. One notable film, Acidman, centers around an estranged father-daughter relationship. Diana Agron plays Maggie, a young woman who tracks down her father (Thomas Hayden Church) in the middle of nowhere. When she arrives, she discovers Lloyd living in a small, unkempt house with giant neon orange letters spray painted on the side spelling ACIDMAN. This is the name the locals have imbued upon the recluse. Maggie slowly attempts to ingratiate herself into Lloyd’s routine, giving him a vague explanation as to why she’s there in the first place. It’s been ten years since the two have seen each other.

Lloyd has two main pastimes; making loud electronic music and hiking to the top of a hill on his property to observe what he believes to be UFOs. When Maggie tags along one evening, Lloyd launches into his theories about communication patterns. It is all very Close Encounters Of The Third Kind. Maggie discovers a trove of VHS tapes, each dated and containing the narration of Lloyd. After watching his obsession progress, she gently confronts her father about his years alone. Lloyd is more comfortable communicating through his beloved dog Migo, and when things get particularly heavy, Bobby Sock, Maggie’s childhood buddy. Through quiet car rides, fishing trips, and awkward cohabitation, Maggie slowly realizes the state her father exists in and how much she yearns for an explanation for his exit so many years ago. But, Maggie is also hiding her true motives.

Diana Agron has such elegant ease in her presence. If you’ve missed her indie work and only know her from Glee, you’re doing yourself a disservice. I found myself making the same expressions as she navigated Lloyd’s unpredictable reactions. She always brings an authenticity that surprises. You just believe her. Thomas Hayden Church brings his brilliant vocal stylings to Lloyd. His gruff charm is disarming and fascinating. His arms-length approach to this character makes this performance enthralling. His passion had me questioning what genre of film I was experiencing.

Acidman‘s cinematographer John Matysiak relies on the location’s beautiful natural light. The ethereal score from Christopher French stuck in my brain. Agron assists by sporadically playing the piano. It’s a subtle nod to the similarities between Maggie and Lloyd. Even if the film isn’t flashy, it’s impossible to take your eyes off the screen. Writer-director Alex Lehmann, alongside co-writer Chris Dowling, manages to bring audiences both a unique and utterly tangible story of parenthood, mental health, and the need for connection. Acidman is a quiet highlight of this year’s festival.