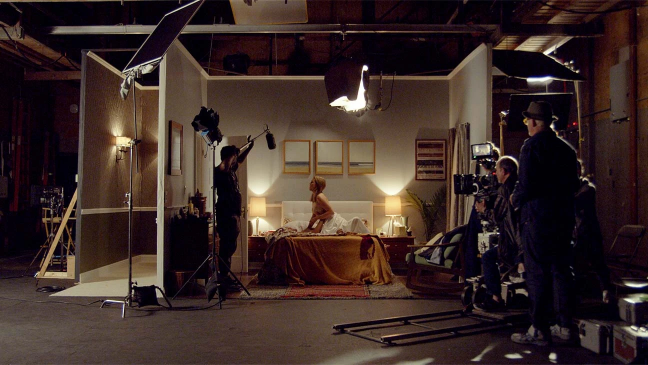 Early in the documentary Body Parts, Rosanna Arquette remembers auditioning in a bikini for a part in the 1991 comedy S.O.B.

One day while shooting, director Blake Edwards told her to take her top off. Then nineteen, Arquette hedged, not realizing the role called for nudity. “Call her agent,” she recalled Edwards saying. Afraid she’d lose her job, she relented. “I always felt very humiliated and very sad about it,” Arquette recalled. “You were expected to do those things.”

Such affecting interviews are but one facet of Body Parts, a film that discusses how some creatives are pushing back against exploiting the female body, especially in nude scenes and sex scenes. The film recently aired at the Tribeca Film Festival.

Director Kristy Guevara-Flanagan (Wonder Women! The Untold Story of American Superheroines) and editors Liz Kaar and Anne Alvergue assemble an engrossing tapestry of film clips and interviews with actors, directors such as Karyn Kusama (Destroyer) and Joey Soloway (I Love Dick), producers, film historians, and intimacy coordinators. The result shows an industry focused on sex and female nudity that hasn’t often thought about its performers, their portrayals, or the effect of sexualized material on audiences.

Some of this is familiar, but it’s hard to look away. As other documentaries such as 2018’s This Changes Everything and this year’s Brainwashed: Sex-Camera-Power have explored, women in Hollywood had more power in front of and behind the camera in the late 1920s and early 1930s. The complex characters they introduced showed women expressing themselves, their goals, and their desires more freely.

The Production Code of the 1930s to 1950s clamped down on anything perceived to offend “common decency,” relegating kisses to three seconds and sex to marriage, unless it had a tragic outcome, historians here say. While the 1960s and 1970s injected more sex and nudity into American films, filmmakers didn’t become more comfortable talking about sex or offering protections for the actors—something still lacking in many films today, an entertainment attorney notes.

While we’ve heard how filming sex scenes is anything but sexy, Body Parts lays out the detailed contractual language that specifies how much of which parts actors agree to show. (Male frontal nudity is often considered “pornography” while women’s breasts are “art,” someone notes.) Besides body doubles, the film also features a visual effects artist who removes wrinkles and blemishes, and a makeup artist who makes merkins, which help performers feel “safe” and less exposed.

At times, Body Parts feels almost too ambitious, tackling so many components that it lacks a tight narrative focus. Yet much of this is fascinating, so much that viewers might wish the film had explored some vignettes longer. For instance, DeWanda Wise (TV’s She’s Gotta Have It) and other actors discuss how giving their bodies to characters causes disassociation and disrespect. Lauren “Lolo” Spencer (The Sex Lives of College Girls), who uses a wheelchair, brings up how rarely people with disabilities have sex on screen, creating the perception that they don’t think about or have sex at all.

It’s a long way from when, like Arquette, film veteran Jane Fonda admitted she felt more “vulnerable” saying no to nudity than actually being naked.