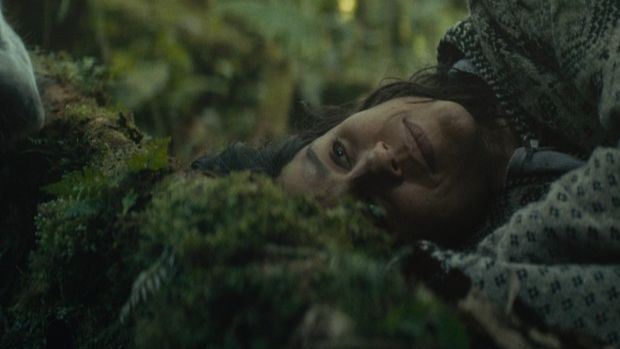 At age 40, Clara (beautifully portrayed by Wendy Chinchilla Araya) lives in an almost childlike state, trapped there by her mother, Fresia (Flor Maria Vargas Chavez), who so dominates her daughter’ life that she won’t even allow Clara the spinal surgery that would relieve her of lifelong pain.

Fresia clearly takes pride in her daughter’s prominent role as healer in their isolated Costa Rican village, a gift bestowed, according to legend, by the Virgin Mary herself. Clara has been content to spend time with those who she really connects with – including all types of fauna, but especially with her beautiful white mare Yuca. But when handsome tour guide Santiago (Daniel Castañeda Rincón) catches both Clara and her teen niece Lucia’s (Laura Román Arguedas) eyes, all the sexuality Clara has never acknowledged bursts forth, changing the family dynamics.

First-time feature director Nathalie Álvarez Mesén skillfully blends touches of magical realism with almost documentary-like observations of Clara, her family, Santiago, and lush woods surrounding Clara’s dilapidated home. The effect is to completely immerse us in Clara’s world, one in which Santiago’s sensual physicality looms large, a horse is one’s soul mate, earthquakes are not necessarily wholly scientific seismic events, and the Virgin’s appearance is both a blessing and a curse.

A cast of non-actors delivers resonant performances, none more so than Araya, a dancer who normally uses her gift to express physical movement. Here, she does the opposite, using her body to express Clara’s emotions, those she represses and those that burst forth. It is a dazzling screen debut.