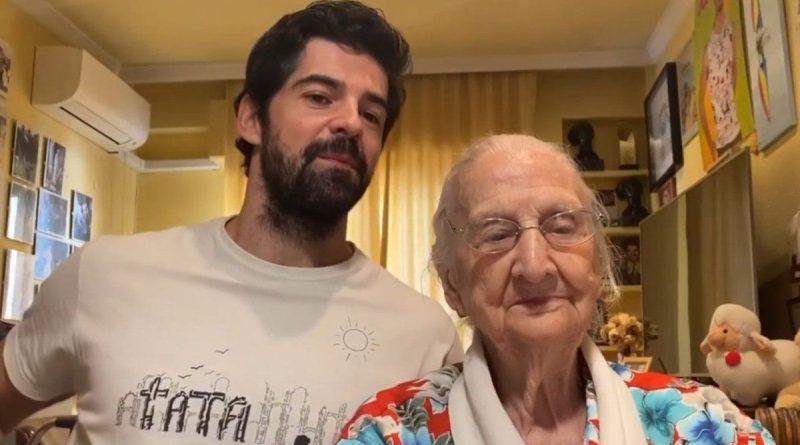 In the heartwarming Spanish documentary now streaming on Netflix, 100 Days with Tata (100 Días con la Tata), the film’s co-star and director, actor Miguel Angel Muñoz, moves in with his beloved, 95-year-old relative to care for her night and day during the COVID pandemic. The virus struck Madrid particularly hard, and Tata’s in-home caretakers quit. So, not knowing how long COVID would last, Muñoz packs up his things and moves into her 35-square-meter apartment, whose walls are lined with photos and memorabilia of him.

The days that follow are full of surprises, joy, fears, hopes and existential crises. Tata (real name Luisa Cantero) becomes an Instagram celebrity across the Spanish-speaking world as the two begin a daily streaming show dubbed “Quaran-TATA” (La Cuarentata). The documentary shows them dressed in costumes as nuns and flamenco dancers, reading fan mail, playing games, laughing, crying, and talking about life – and death. They hold a daily, minute-long candlelight vigil for those taken by the virus, a group that grew in dizzying proportions daily in those early months in Spain.

Muñoz dedicates 24 hours of the day to Tata, waking with her multiple times at night to take her to the restroom, bathing and dressing her, giving her tasks, dreaming up surprises and activities to keep them busy. Especially moving scenes show him sponging her body in the shower, noting how careful he has to be to avoid damaging her “onion” like skin, giving her a first-timer’s sensation of what it feels like to be tickled on the bottom of the feet, combing her hair and tearing up whenever the subject of her death comes up.

And Tata, astonishingly, rejuvenates – her memory and mood improve, and she even sprouts some black hairs in her thin grey mane. This fills Muñoz with joy, but also an apparent new sense of responsibility that without him there, she might deteriorate again quickly. Every time he leaves the house to go shopping, he says he fears coming back and infecting her.

The two have always had what they term “a love affair.” Tata, who is actually his great-grandmother’s sibling rather than a direct grandparent, watched Muñoz from the time he was little. In the film, she admits she’s ready to die and is only living for him. They both know he has to learn to accept the reality of the end of her life, and he bravely documents his therapy sessions to help him work through this.

What he’s crafted out of this trying experience is a testament to the power of love, the difficulty of aging, the reality of death and the importance of family. 100 Days with Tata is a love letter to a 95-year-old woman who never married, worked as a cleaning lady, and took care of her sister’s great-grandchild as if he were her own son.

The fact that Muñoz and Tata went back and – together with the help of a scriptwriter and a traditional 3-act structure – reenacted scenes lived during the pandemic but not captured on film, could from an intellectual point of view undermine the documentary’s strict realism. But it does not take away from the meaningful life lessons or the authentic, tender relationship at the heart of this film.