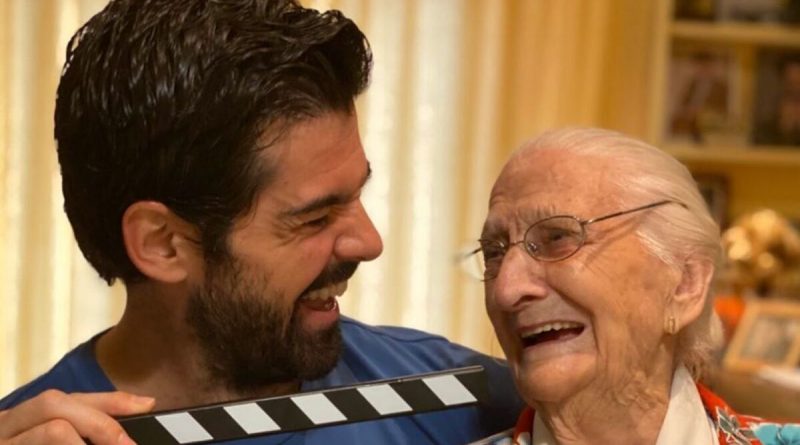 100 Days with Tata, the documentary that Spanish actor/director Miguel Angel Muñoz crafted out a year spent in Covid19 quarantine with his great aunt, Luisa Cantero, the titular Tata, is a testament to the power of love, the difficulty of aging, the reality of death and the importance of family. 100 Days with Tata is a love letter to the 95 year old woman who never married, worked as a cleaning lady, and took care of her sister’s great-grandchild as if he were her own son.

The fact that Muñoz and Tata went back and – together with the help of a scriptwriter and a traditional 3-act structure – reenacted scenes lived during the pandemic but not captured on film, could from an intellectual point of view undermine the documentary’s strict realism. But it does not take away from the meaningful life lessons or the authentic, tender relationship at the heart of this film.

AWFJ spoke by Zoom with Muñoz, who was in the Canary Islands on tour with a theater production, about the film, his Tata and what he learned from their pandemic experience.

Jennifer Green: How is Tata?

Miguel Angel Muñoz: She’s doing well. I am very happy because she’s about to turn 98 already… And the truth is she’s good, as the documentary shows, with her aches and pains and sometimes more or less desire to face life. But generally speaking, she has an unbeatable attitude and I feel very lucky. JG: You could see that attitude improving during the filming of the documentary as well, which was powerful.

MAM: Yes, that was really surprising and a lesson for me. First, because I’ve always looked after her and so what I do in the film isn’t out of the ordinary. But being together for so many days, dedicating so much time to her, so much care and love – seeing how someone her age could evolve like that was astonishing. It was a very important lesson for me, but also frustrating because I can’t be 24 hours with her, I have to live my life as well, as you see in the film.

JG: Those moments were hard to watch as a viewer because at the same time you were happy to see her improving… you also appeared to be feeling more responsibility, as if her happiness or well-being depended on you?

MAM: That’s right and we’re still working on that. It felt important to me to show that in the documentary as an open and truthful account. And it’s true, at the same time that she was on her way up, I was on my way down. She sprouted black hairs, and, it’s not really important but the quantity of grey hairs I got during the pandemic was impressive! And physical pains – the hernia, that caused me a lot of pain and I’m still healing. And I’m also learning and trying to put into practice the words of my therapist – to try to focus on all I can give her rather than all I don’t. JG: There’s a moment in the film which really stuck out to me because you say that she was already old when you were born. I wondered if you could talk about that because I think, maybe especially for women, after a certain age, women are discounted a bit and seen as already old. But this woman was just a little more than halfway into her life back then.

MAM: She is a reference as a woman and I think as a 21st century superhero. When I ask Tata how old she’d like to be now, she doesn’t say 15, 25 or 30, she says 80. At 70 years old, she felt she was still in the prime of her life with a ton of plans and the health of an oak tree to handle all the things she wanted to do without needing a partner by her side to make her feel good, without the need to feel “pretty” by society’s standards – but just being her, as she was. She was 59, almost 60, and I remember her as beautiful. One thing is the stereotype of beauty or the canon of beauty society sets from outside, but what we’re not accustomed to is those who set it from within. For me, it was important in the documentary to talk about therapy because that’s something society has had trouble accepting as a natural habit, like taking care of our outer selves. We’ve been practicing and promoting that for years, but caring for our inner selves and our emotions and therapy, talking about what one is going through, one’s feelings, about love – that’s more complicated, right? And that was very important for me to show here. Tata was born in 1924 and all the different types of therapy didn’t even exist back then, yet today she’s the wisest person I’ve ever met.

And as far as being an independent, hard-working, feminist woman – she’s a very important model.

JG: Does she think the same? Does she herself that way?

MAM: No – she doesn’t see herself that way, and that’s what makes her magical. She’s not conscious of the important message she’s putting out there and, through that, all the good and significant things in her life. I owe her everything, together with my parents, who have always been there for me but are much younger. I owe her my education, my way of being, my way of thinking. I feel very proud to be like her and she’s brought something very valuable to every person in her life, though they might not realize it.

She is who she is – one of those wise and illumined people who really aren’t conscious of their talent, their genius, their intellect. She doesn’t think she does anything out of the ordinary. And every day, especially now that the documentary has premiered to such success… every day she gets tons of messages and inspirational cards. We read them to her and they make her very happy… But she still doesn’t accept that she’s really done something so important, and that makes her even grander.

JG: You’ve talked about the values of your relationship that you wanted to show in the film. Can you explain what you mean by that?

MAM: The main thing is the unconditional love we feel and that we mutually profess, which isn’t that common when the familial relationship is so distant. My Tata could have been a person hired by my parents to take care of me, and I love her as much as my mom or my dad. That’s the first thing. And then two people can have a true love relationship without having that family connection or being a couple or having a sexual relationship or other type of sentimental relationship.

Additionally, something really important is how to nurture a person despite 60 years of difference, like we have. I think normally young people look at old people as if they’re uninteresting or have nothing worthwhile to offer us. We don’t have the time or patience to dedicate to them. But in my case, my Tata managed to help me do the most important things in my life – personally and now professionally, because thanks to her I also made the jump to directing… Ultimately the person you love the most is who you know the most and who will inspire you the most. JG: And apart from the personal relationship, was it important to you to give a platform to older people, especially during the pandemic?

MAM: That, and a bunch of other topics – the film talks about the elderly, about loneliness, about how unprepared we are to age, about how to confront aging and how to accept not being independent, or of having caretaker syndrome like me. It’s a portrait of the pandemic but concretely of older people. I didn’t set out to talk about any of that, it all stemmed from wanting to be honest about our reality. All these important topics came up, but my intention wasn’t to provide a platform for any of that. I was probably the most surprised to find in this reality I thought I already knew, after filming and later in the editing room, that’s where we saw what was there and what we wanted to show, but it wasn’t intentional. I’d be lying if I said I wanted to talk about all that. It emerged fortuitously.

JG: If you had to summarize, what have you learned about confronting old age?

MAM: I’m still learning! And what’s more, I don’t want to get to that age, I wouldn’t like it. But I do hope to capture the message that we reap what we sow. I don’t think I’ve done anything extraordinary for her – any person who has a Tata like mine would do the same as me. That is to say, if a person is grateful, humble, generous, then they will have people to care for them when they need it. But sometimes, life is difficult and we lose our independence, we become pricklier, we get angry instead of hugging or being grateful for those who help us age, and that’s what can lead some people to wind up alone. I hope I can be like my Tata and have her gifts, but I recognize that I’m still not prepared to and I wouldn’t like to get to that age. JG: Well, hopefully we get far – if not that far.

MAM: And above all that we get there with joy. The biggest lesson for me is how many things I need in order to feel alive, in terms of adrenaline and of living… I do a thousand things a day, like the documentary shows… I don’t stop and that’s what I like, what I find fun, and what makes me happy. And my Tata is happy if her body doesn’t hurt or just to have her coffee, to see that plant, to admire nature. It’s impressive, and she can also enjoy big things. I hope I can manage to enjoy the little things, because when you get to that age you can’t do all the things you could when you were young.

EDITOR’S NOTE: This interview has been translated from Spanish and edited for length and clarity.