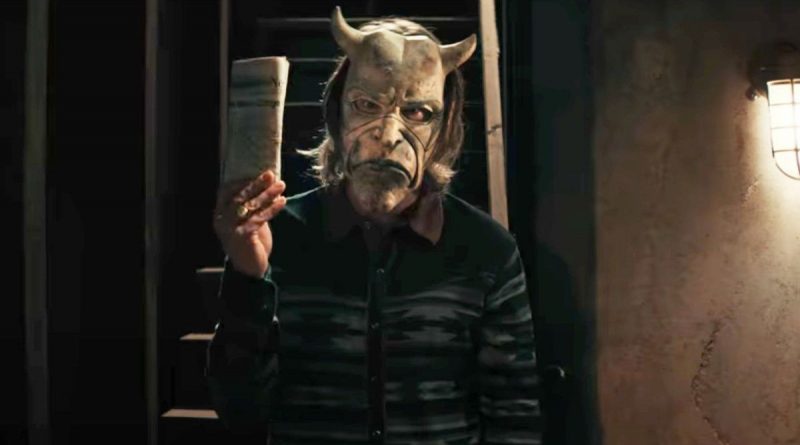 Set in 1978 Denver, an abducted teenager uses an unplugged wall phone in a sound proof basement crypt to communicate with a sadistic killer’s previous victims in hopes of saving his own life. The Black Phone is a perplexing puzzle that won’t leave you hanging…up. It won’t necessarily have you on the edge of your seat either, but that’s only because The Black Phone is more creepy than it is frightening. It’s more like watching a crime drama with jump scares. A less Sci Fi-ish Stranger Things.

The Black Phone is based on a short story by Joe Hall, son of the Brains of Terror, Stephen King. And he’s definitely a knick off the old dagger in his spreading of evil mixed with love and life lessons.

Normally Mr. Nice Guy, a masked Ethan Hawke is The Grabber, the sinister serial killer with a villainous voice emanating from from behind a toothy face covering. He snatches young boys and tortures them in the cellar of one home before killing them in another. Newcomer, Mason Thames plays Finn, The Grabber’s latest victim, and the bullied 13 year old is determined to be his last with the help of those on the other end of the receiver.

On the surface, The Black Phone is psychological terror, but it’s real message is finding your inner strength. Look for some gore, violence, foul language, dysfunctional families, a dad that looks like Charles Manson, eerie music and smart aleck kids. My husband, Ricky, gives The Black Phone 👁👁 open. I give it a 7 out of 10.