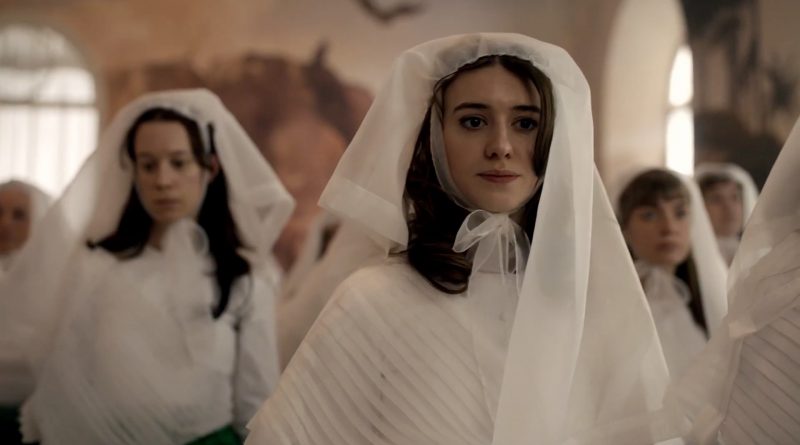 Surprisingly, the church of the Latter Day Saints supported The Book of Mormon, the crass Broadway musical. Do not expect such tolerance for Under the Banner of Heaven, the extremely intense, seven-episode mini-series. It, like the investigative book by Jon Krakauer on which it’s based, accuses Latter Day Saints themselves.

At the story’s center are the 1984 murders of a mother and child, killed within the Mormons’ closed world. A detective, Jeb Pyre, is sent to investigate. He is devout, having been raised in the sect. His knowledge of the ways of the believers matters. Pyre is partnered with Bill Taba, a Native American of the Paiute nation, who is spiritual but not religious. His advice to Pyre, who waits for guidance from Heavenly Father, is that “the gut will give you all the wisdom you need.”

The two detectives investigate fundamentalists. The Laffertys comprise many brothers, each vying for dominance, each hating women. They defy the American government as they follow words laid down by Joseph Smith and Brigham Young, founders of the Latter Day Saints in mid-19th century.

That history weaves in flashback throughout Under the Banner of Heaven. Director and co-writer Dustin Lance Black, raised as a Latter Day Saint, honored his past but also exposed historical tenets that might have led to these modern murders. Early on, the accused husband declares, “Our faith breeds dangerous men.” That theme defines the intensity of Black’s production.

The modern and 19th-century families mean that the cast for Under the Banner of Heaven is huge. Among the standouts are Sam Worthington, Rory Culkin, and Wyatt Russell as Lafferty brothers with Daisy Edgar-Jones as Brenda Lafferty. Gil Birmingham works solidly as Taba, Andrew Garfield, so effective recently in tick, tick…BOOM, inhabits Jeb Pyre, especially on Pyre’s spiritual journey. Garfield’s face tightens with each doubt that tests Pyre.

As co-writer, Black folded into the script concepts of polygamy, blood atonement, evil, misogyny, and racism. He also fiddled all the pieces of this puzzle into a well-seamed production. As director, Black decisively ended scenes by fading to black.

Under the Banner of Heaven calls for commitment, but it rewards that commitment with sound questions about devotion.