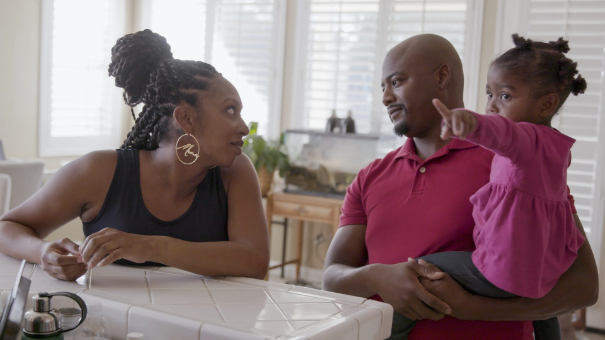 Based on a book of the same name by Eve Rodsky, director Jennifer Siebel Newsom attempts to bring a light touch to some very somber statistics about the effects of gender roles in families struggling to maintain their work life balance. Seen through the somewhat fractured prism of the recent Supreme Court ruling on Roe v. Wade, some of the humor can make a viewer wince rather than ruefully chuckle but the points raised are worth pursuing.

Rodsky and her family are featured in Fair Play as she recounts her own experiences with bearing the burden of the emotional responsibilities for her family as well as her career goals. While it is amusing to hear her tell the story of her husband texting her about not bringing home blueberries when she went grocery shopping, it seems somewhat trite and even petty compared to the greater issues facing the other couples in the film. The same can be said of Melinda Gates condemning society for placing importance of work over family when it is well known that Microsoft, her former employer and the company her ex-husband founded, placed enormous pressure on its employees to work ridiculous hours in its rise to prominence.

Representative Katie Porter is a breath of fresh air in comparison as she tells of her struggles to make her fellow elected officials listen to the realities of how life looks to a single working parent. Fair Play works best when it focuses on the stories of families trying to keep their little ones fed, housed and educated while not fraying the last nerve of their spouses who are trying to do the same. And it’s not easy.

Can the gender gap of unequal pay, unequal family responsibilities and unequal expectations in their relationship be bridged between men and women? Fair Play makes the case that it can with the help of a little mediation and better communication. This might have sounded more plausible before recent events but as the film itself points out, the problems facing families are just reflected in society on a larger scale. This may well be the understatement of 2022 but Fair Play does give a baseline to work from for any couple who wants to take the first steps toward a better and more respectful relationship. For themselves and their families, it couldn’t hurt.