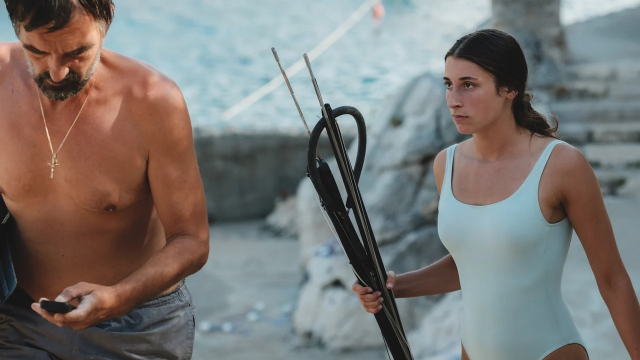 Executive produced by Martin Scorsese and winner of the 2021 Camera d’Or in Cannes for first-time feature director Antoneta Alamat Kusijanović, Murina is a slow-churning, disquieting tale of a young woman’s revelation that her life could have been entirely different than what it is, and her empowerment to change her future.

As teenageer Julija, Gracija Filipovic offers a brave performance, spending most of the film in a bathing suit (which men ogle and refer to as “practically naked”). Julija has yet to start living, but she’s more than ready. She watches the adults around her – and the partying twenty-somethings on vacation – with an eagle eye, sometimes through binoculars. We see the world through her discerning, eager, ready-to-consume-the-world gaze.

Julija lives on the Croatian coast with her brutish father Ante (Leon Lucev) and her beautiful mother Nela (Danica Curcic). When the film opens, Ante is nervously preparing for the arrival of old friend Javier (Cliff Curtis). It seems Ante hopes Javier (whom he refers to as “God on earth”) will buy some land from him, providing a much-needed cash infusion that, Nela notes, could allow the family to move to capital city Zagreb. But locals keep making reference to a fire and the many killed, suggesting the land has a sinister, or at least troubled, recent history and significance.

And though their home, a white stone and columned structure with olive trees and stairs leading straight down to the Adriatic, looks like paradise, and characters call it just that, the family’s home life and relations feel oppressive. When Julija is in the sea, where she spends significant time, she seems free, strong and capable of anything. When she’s on land and in her home, one of the only places she goes, she is entirely under the thumb of her controlling father. Her mother is her confidante and ally, but even she abides by her husband’s authority, which borders on cruelty in some instances.

A lot is left unsaid in Murina, or is said in passing. You have to pay close attention to the dialogue to follow the full story. But more importantly, you have to watch the characters very closely for clues to how they feel and what background we don’t yet know about. It’s clear Nela and Javier have a history, and their frustrated romance comes to light, but what’s not clear is why Nela chose and continues to stay with Ante. Her decisions are the first clue that maybe Javier isn’t as perfect as he seems. Still, Julija envisions a different life with a different father in a different place, and she is ready to go.

In contrast to the starkly sunlit setting, the film’s mood is brooding, sometimes ominous. Every time characters dive, deeper and deeper into the sea and its maze of underground caves, you wonder if they’ll make it back out alive. Portentous music underscores the sentiment. Underwater (and on land) cinematography by Hélène Louvart (The Lost Daughter, Happy as Lazzaro) is stunning, and the film opens and closes on full-screen shots of cerulean-blue water. “Murina” translates to a moray eel, a symbolically elusive creature that Julija and her father hunt underwater.

In one scene, Julija is forced by her father to recite a poem, an ode to the sea and its “nasty tempers” and untrustworthiness. The adults in Julija’s life certainly prove themselves untrustworthy if not capable of nastiness, but the sea would seem to be the one reassuring constant in her world. When she swims off in a final scene, though her direction and destination are unclear, the feeling is one of freedom, strength and possibility.