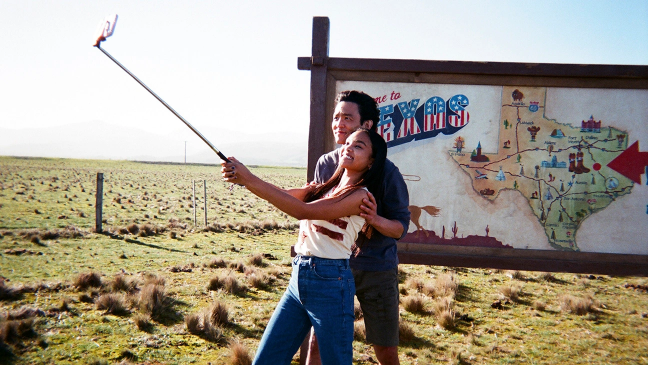 Don’t Make Me Go is an emotionally charged example of a conflicted “buddy film” between a father (John Cho) and his teenage daughter (Mia Isaac). Their poignantly packed road trip brings unshared truths, undiagnosed medical calamity, and feelings of abandonment hemmed by moments of fun, life lessons, and a shared love of Iggy Pop’s The Passenger, a portentous upbeat song that serves as the running theme of this film.

Despite the looming unknown, this is a sweet film with a screenplay occasionally telegraphing the impending heartache. It has the good sense to intersperse the dialogue with great secondary characters and two strong leads to carry you through it all. No spoilers from me, but daughter Wally says it all right up front in the opening voiceover: “You may not like how this story ends.”

Everyone experiences loss, but how soon and senseless, or the bad luck of health gone awry tempers the severity of the shock of it all.

We live and find out in moments of solemnity, sitting perhaps in a doctor’s office, that our expiration date is nearer than we imagined. So it goes for Cho’s seemingly healthy single dad Max, who has raised his headstrong 15-year-old daughter Wally to the brink of womanhood. Her age is the basis for everything that’s expected from her and how the world affects her, with very little reflective analysis of the people around her.

It just goes with that age.

Max is experiencing some significant headaches that turn out to be more than a migraine. The timing of how he shares this information with Wally is a build throughout director Hannah Marks’s beautifully framed and lensed film that takes us on a journey with these two,

As we watch their trip unfold, first a long drive to Louisiana for Max’s 20th college reunion, then a more extended excursion to Wally’s absentee mother’s home in Florida, you understand the angst Max carries for potentially leaving Wally alone without an adult guardian to get her through some tough teenage years ahead of her.

If you have children, these thoughts cross your mind. What happens if I die? Who do I want to raise my children? These are real concerns and the driving reason for the road trip for Max. But, predictably, Wally is too far into her teen drama and boy issues to pick up on subtle clues that something is amiss.

The movie shines in one scene between an old friend-turned-enemy who “stole” Wally’s mom Nicole (Jen Van Epps), away from Max. But, of course, nothing is ever that simple, and as we hear Dale’s story (Jermaine Clement), who also got the same treatment as Max from Nicole, who at this point of the film, we surmise has some pretty big issues with relationships in general, not just as a mother.

Depending on where you are emotionally in your current state, this film might wreck you. No more can be said here, except that life is one big curve ball festival, and the only constant you can count on is change.

And when the times come for you to face the tremendous losses of your life, you have to find it within yourself to carry on and get back to living again, which is what I felt the filmmakers were trying to accomplish with this film, which is very worth seeing for Cho’s continued subtle genius acting talent and the rising star of Mia Isaac, who grabs every scene she appears in.