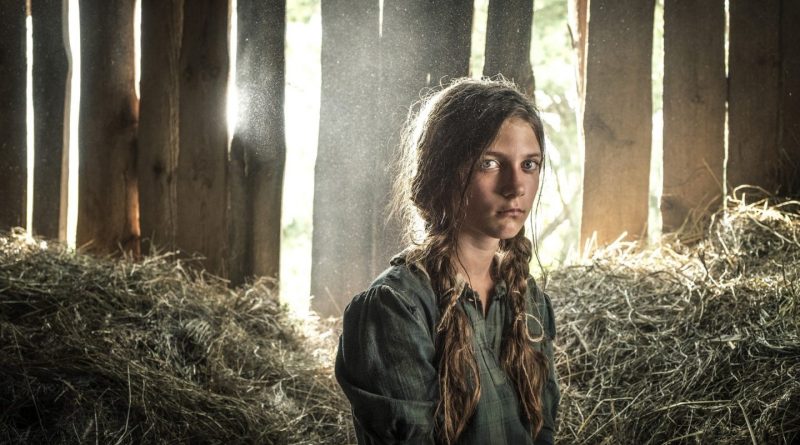 On the Polish border of Ukraine, two young refugees flee their Nazi pursuers in 1942. This is how My Name is Sara opens and it is a nail-biter of a first act as we see Sara (Zuzanna Surowy) being separated from her family as World War II devastates her home country. Her true story of survival at a terrible cost is the plot of the film and it makes for a compelling opening and closing with a bit of a slog in the middle.

Director Steven Oritt takes an admirable approach to his characters in not showing them in the extremes of good or evil, with a few exceptions. The farm workers that take Sara in are just struggling to survive as much as she is, except they aren’t being hunted down and murdered. However, they do routinely lose much of their food and livestock to raids by hungry Nazis.
Surowy as Sara is just outstanding in how her eyes convey so much when she must remain silent as she pretends to be a Catholic girl who fled a domestic violence situation. She is hired on as a nanny to a rural family’s two small boys. Gradually she earns the trust of the parents but is never completely safe as she literally hides in plain sight of the Nazi soldiers.

This cat and mouse game would be more effective if the story didn’t stray into the infidelities of the parents of the boys she tends to. The lifestyle of the Ukrainian people and their culture is interesting but some of the minor characters receive too much screentime and muddy the plot. Surowy and the patriarch of the family, Pavlo (Eryk Lubos) have a strong chemistry together and their scenes save the film from getting completely lost in the weeds.

While not as strong as some other recent films like The Survivor, and the animated Charlotte, My Name is Sara is a touching tribute to a young woman who did whatever it took to survive against incredible odds. Stories like hers need to be told lest we forget the past and the old adage about it repeating becomes true.