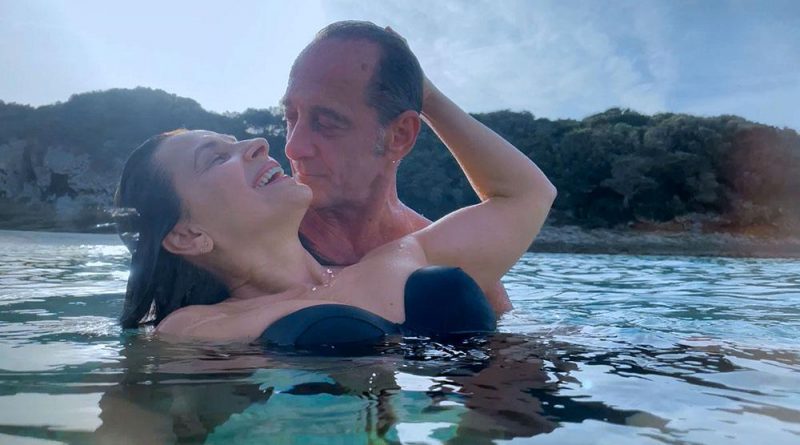 Both Sides of the Blade tackles incendiary passion amidst tension.

One Parisian winter day, as she heads into the radio studio, she accidentally spies her ex-lover François. Earth-shattering consequences follow. The impact of her unsettled reaction to François is driven home by an idyllic opening scene in Corsica as Jean and Sara float entwined, luxuriating in a romantic embrace. Soon Jean and François have restarted their former agency, Jean scouting and identifying promising rugby prospects.

Additional information about all their pasts remains unspecified, the focus entirely on the titanic disruption to Jean and Sara’s life caused by Francois’ reentry. In a press notes interview, Denis says that the characters’ texture “is not in their biographies. It is in the moment. Their fleeting present . . . suffices to set up the storm of sentiments that will leave them ravaged.” We’ll see the rupture of a loving relationship, as Sara explores her passion in an unusually honest, confrontation of desire. Less melodrama than observant burrowing into this crisis, Denis complicates this with subplots concerning Jean’s multiracial teenage son Marcus, Marcus’ grandmother’s ineffectiveness as a guiding force, and pervasive racism introduced through Sara’s show and Jean’s advice to Marcus.

Christine Angot wrote this searing collision of past and present: Sara struggling to regain her balance, Jean caught in the middle, François the wild card. Juliette Binoche as Sara, Vincent Lindon as Jean, and Grégoire Colin as François deliver powerful, sensuous performances. And from the opening scene on, Tindersticks’ ominous music signals trouble to come, and the song Stuart Staples wrote for the film proposes life as a double-edged sword. Eric Gautier’s cinematography interprets the story with an expressive cascade of color in several intensely emotional scenes while low light interior and nighttime scenes, as well as an abundance of closeups, dominate. Memorable and haunting, “Both Sides of the Blade” is in French with English subtitles.