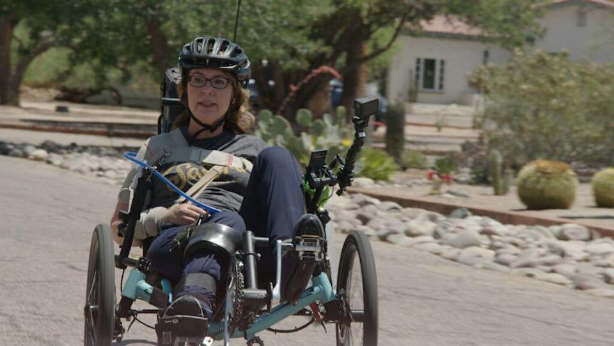 How angering and heartbreaking to watch the galvanizing documentary Gabby Giffords Won’t Back Down just days after gun violence killed spectators at a parade in Highland Park, Illinois while Americans are still reeling from the murders by assault weapon of schoolchildren in Uvalde, Texas and grocery shoppers in Buffalo, NY, among many other recent shooting deaths.

No matter how much you think you know about Gabby Giffords, this moving film from directors Julie Cohen and Betsy West is eye-opening, urgent and revelatory. It traces how Giffords, a charismatic and impassioned moderate Arizona Congresswoman with a bright political future, was shot through the head while meeting with her constituents on a January morning in 2011. Giffords miraculously survived but eight others, including a nine year old girl, were killed in the assignation attempt. We get to witness Giffords’ determined, difficult battle to recover her speech and mobility, aided by a dedicated care team, her loving family, friends and colleagues including President Obama and First Lady Michelle Obama, and Giffords’ devoted husband, astronaut Mark Kelly.

The film recounts their courtship and loving marriage, rendering it more meaningful when Kelly decides to pick up Giffords’ mantle and run for the Arizona Senate seat that, before the shooting, most politicos thought was Gabby’s natural next step. In the devastating aftermath of the Sandy Hook elementary school massacre, Kelly and Giffords embarked on their own mission for gun reform, reaching out to gun owners in red states who are receptive to common sense controls. Footage of Giffords testifying, in her halting but impassioned speech, about the need for gun reform before her visibly humbled former colleagues in the US Congress, is the embodiment of a profile in courage. But Cohen and West also include many inspiring moments and interviews that reveal Giffords’ humor, spirit, zest for life and unwavering sense of purpose.