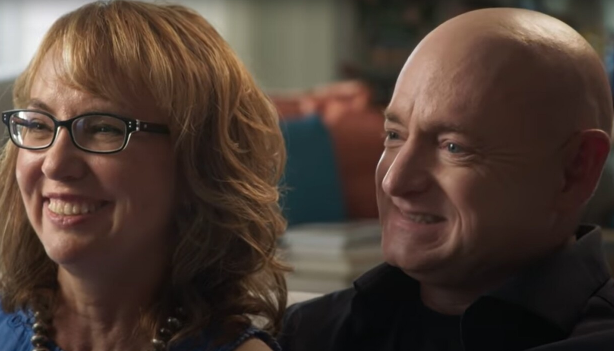 Gabby Giffords Won’t Back Down arrives in theaters mere months after 10 people were killed in a racially motivated attack in Buffalo, NY, and a mass shooting in Uvalde, TX, that killed 19 children and two of their teachers and less than two weeks after seven people died in a shooting at a Highland Park, IL, Independence Day parade. In the wake of this unending gun violence, an already important documentary about the Democratic Arizona Congresswomen who survived an assassination attempt takes on new urgency.

The one-time CEO of her family’s chain of tire stores, Giffords had just begun her third term as Arizona’s 8th District representative when she held a constituent meet and greet in front of a suburban Tucson Safeway on January 8, 2011. A gunman attacked, shooting 19 and killing six, including a 9-year-old girl. Giffords was shot in the head and nearly died. Giffords husband, NASA astronaut Mark Kelly (now a US senator), documents his wife’s recovery, footage that directors Julie Cohen and Betsy West incorporate in their film.

That footage plays a central role in Gabby Giffords Won’t Back Down as Cohen and West limn the assassination attempt and Gifford’s injuries and long recovery. Coming back from brain damage was a long, slow process and is ongoing. She walks now with a limp and she suffers from aphasia, which combats cleverly with music. The shooting put an end to her career in political office, although she continues to live a political life, advocating against gun violence through her organization, Giffords.

If Cohen and West had stopped there, their film would be a compelling record of one woman’s resilience in the face of violence and a call to stop the proliferation and easy access to guns used not to hunt game but humans. But the filmmakers go further than that. Not merely an advocacy or political doc, it also one that is personal as it delves into the relationship between the US representative and the astronaut, depicting the steadfast, loving bond between a couple that has been to hell and survived.

A host of Giffords’ friends and colleagues appear in the film, including House colleagues James Clyburn and Val Demings and Senators Kirsten Gillibrand and Chris Murphy. A big get for Cohen and West is President Barack Obama, who speaks movingly about a woman he regards not just as a political ally and someone who survived a horrific crime but also clearly as a friend. Despite all that star power on the screen, it is that central relationship between Giffords and Kelly that registers the strongest impression.

Cohen and West have made a resonant documentary, one the reflects its subject’s optimism, which remains firm despite everything that’s happened to her. It is also a film that champions the cause that no doubt will command her attention for the rest of Gifford’s life: the fight for sane gun laws to ratchet down the violence that infects the United States. Gabby Giffords Won’t Back Down is essential viewing.