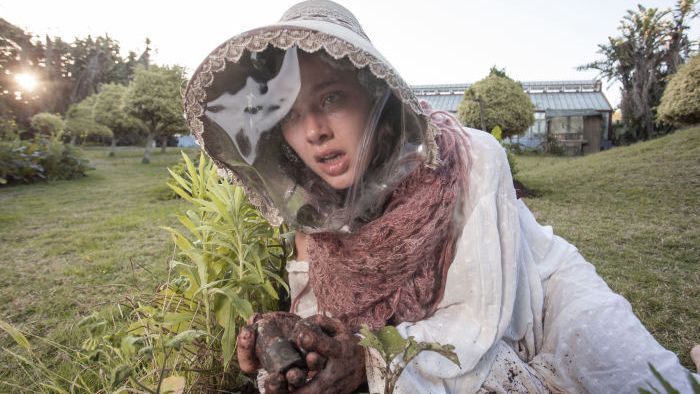 The artifice of civilization and the fragility of memories collide in Glasshouse, an atmospheric sci-fi drama whose sluggish pacing prevents it from being truly shattering.

Set after a worldwide pandemic called the Shred, which robs people who breathe the outside air of their memories, Glasshouse has a dreamy feel and old-fashioned trappings reminiscent of The Beguiled. It takes place entirely in and around a large hothouse, where Bea (Jessica Alexander, Get Even) and her sister, Evie (Anja Taljaard, Redeeming Love), take turns on guard duty in loose white gowns and makeshift gas masks fashioned from bonnets.

Any intruders wind up fertilizing the fruits and vegetables they grow after Mother (Adrienne Pearce, The Red Sea Diving Resort) recites their blessings and rules. Their sanctuary is sacred, she tells the girls, younger sister Daisy (Kitty Harris), and son Gabe (Brent Vermeulen, The Harvesters). “Our memories stand like a wall of glass between us and oblivion,” she says.

Yet memory can be a tricky thing—and stories can change.

In the dark, Bea hoped he might be Luca, an older brother who left to scout for other survivors like them. Luca also was Bea’s lover, which she explains to the stranger in a way that indicates the family’s relationships are more by name than bloodline. Certainly Gabe doesn’t feel brotherly toward Evie, who cares for him tenderly ever since the Shred harmed his brain as a child. Unable to communicate fully, he acts out in frustration and anger to the point at which the women often strap him down at night.

As the stranger recuperates, Bea imagines that he is Luca. He seems kind enough, whittling a horse for Daisy and flirting with Bea, although Pelser’s ambivalence makes us wonder if he just doesn’t want to lose out on a cushy setup. Mother seems to tolerate him more than trust him, pragmatically knowing that plants aren’t the only things that need tending. Evie wants him gone, not wanting him to play with Bea’s feelings. The truth, she insists, has to mean something.

What’s the truth about this stranger? And what happened to Luca? Glasshouse feels like it takes too long to answer these questions. Although the film has an interesting premise, we’ve seen stories before where an outsider disrupts an enclosed community, and the sexual tension and betrayals boil over predictably.

That said, the last act has a few twists that make Glasshouse diverting enough. Still, viewers might wish the filmmakers had planted more suspense and intrigue along the way to make for a more devastating finish.