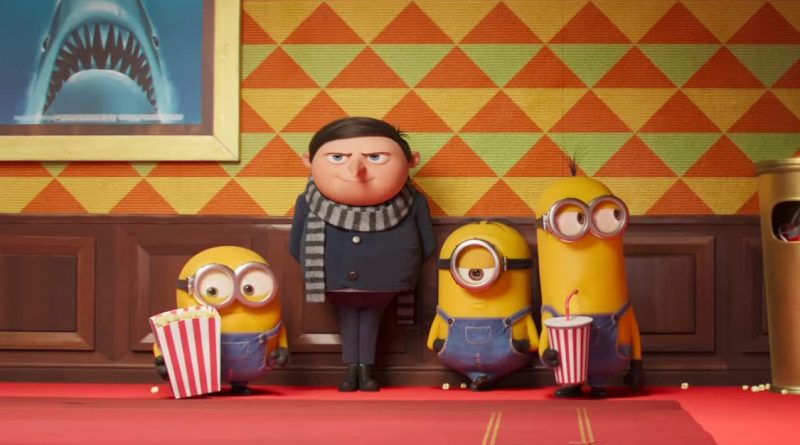 Minions: The Rise of Gru is cheerfully bananas. After sitting on the shelf for two years because of the pandemic, this sequel to 2015’s Minions arrives in theaters at last, boasting plenty of expected mayhem—and surprising heart.

Opening in 1976, roughly after Minions ended (in the 1960s—don’t mind the math), Minions: The Rise of Gru presents the future supervillain-turned-secret agent of the Despicable Me franchise as an impish 11-year-old. Gru (Steve Carell, The Morning Show) has grand ambitions and adorable wide brown eyes that offset his mini gray suit and scarf. He’s not happy just clearing out a movie theater with fart spray or cutting in line for ice cream. He wants to be recognized as the world’s greatest villain—and his loyal yellow sidekicks resembling Twinkies in overalls are eager to help.

Yet Gru isn’t sure at this point whether he likes these little guys, who are more enamored with mischief than capable of malice. He appreciates their enthusiasm and the lair they build in the suburban home he shares with his disinterested mom (Julie Andrews, Julie’s Greenroom). But he also finds them awkward, particularly Otto, a plump Minion with more braces than brains.

Gru first sends the Minions away after he receives a job interview with the Vicious Six, a villainous cell that operates out of a record store. Once they meet him and realize he’s a child, they send him packing like their former leader, Wild Knuckles (Alan Arkin, BoJack Horseman), whom they thought too old for the job. Soon Gru meets up with Wild Knuckles, whom he’s long admired—and who’s still fast on his feet—in pursuit of the film’s MacGuffin, a green magical amulet activated during the Chinese New Year.

What they’ll do with that amulet is a side note to the core theme: finding your tribe, and recognizing the value in others.

That sounds a bit cuddly for a franchise that cheekily exposes Minions’ butts for a quick laugh, but it resonates with charm. Credit that to Carell’s and Arkin’s voice work, and the script by Matthew Fogel, who handled the story on The Lego Movie 2: The Second Part. (Minions screenwriter Brian Lynch receives story credit here.)

As in Minions, the villains have their own news network and wacky world skirting our own, with secret entrances, gadgets, and puns galore. Returning Minions director Kyle Balda shares directing duties this go-round with Brad Ableson (Legends of Chamberlain Heights) and Jonathan del Val (The Secret Life of Pets 2). They and the animators have a loose, let’s say groovy, vibe befitting the 1970s, with a hilarious opening credits sequence reminiscent of a James Bond film that sets the tone for the antics to come. The film also makes fun use of several needle drops, including Linda Ronstadt’s “You’re No Good,” “Bad Moon Rising,” and a Minion choir complete with robes and angelic gibberish.

The slapstick is clever and funny, and the rest of the voice talent is rich. Taraji P. Henson (Empire) has a blast as Belle Bottom, a Vicious Six villain who rocks a purple motorcycle, jumpsuit, and an outsize afro to match her attitude. Action veterans Jean-Claude Van Damme (Kickboxer: Retaliation), Dolph Lundgren (Aquaman), Danny Trejo (Big City Greens), and Lucy Lawless (Ash vs. Evil Dead) round out the vicious crew as Jean-Clawed, Svengeance, Stronghold, and Nun-Chuck, the latter a fierce nun.

French writer-director Pierre Coffin (Minions) again voices the Minions patois, giving the central ones different personalities, from overconfident Stuart to responsible Kevin, innocent Bob, and motor-mouthed Otto. Speaking of Otto, he gets an unexpected hand from a cool biker (RZA, Clean) while the others learn kung fu from Master Chow (Michelle Yeoh, Everything Everywhere All At Once), an acupuncturist who rescues them from being bullied, wiping the floor with three henchmen half her age.

The smallest of us are capable of great things, she says, encouraging kids in the audience while showing how she and Wild Knuckles still have plenty to offer. That’s a heartening subtext for adults that this silly concoction makes extra sweet.