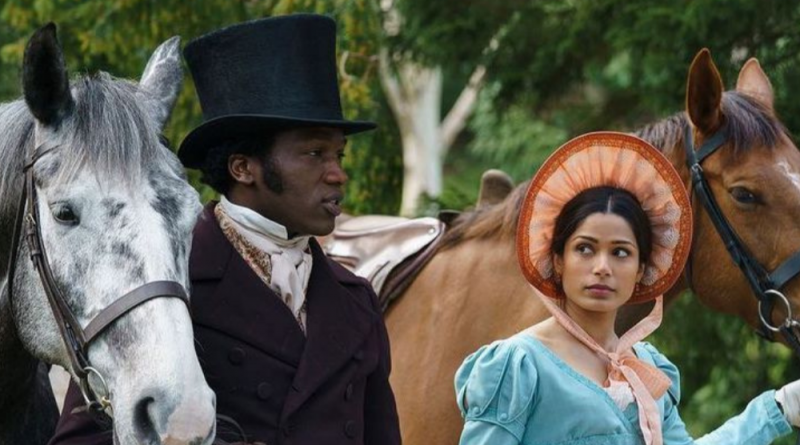 Now, there’s Mr. Malcolm’s List, a frothy, Regency-era romantic comedy, directed by Emma Holly Jones and written by Suzanne Allain, based on her 2020 novel by the same name.

Set in 1818 England, the upper-class, marriage-market plot revolves around the season’s most eligible bachelor, wealthy Jeffrey Malcolm (British/Nigerian actor Sope Dirisu), who is seen yawning through a boring ‘first date’ at the opera with Julia Thislewaite (Zawe Ashton), a former debutante entering her fifth social season as a single woman.

Because unsophisticated Julia is unable to sustain an intelligent conversation, there will be no second date – an indisputable fact that Julia finds humiliating, particularly when a mocking caricature of her is distributed throughout London, captioned “Next!”

From her cousin, bumbling Lord Cassidy (Oliver Jackson-Cohen), Julia discovers that notoriously fastidious Mr. Malcolm has a checklist of 10 qualities that any future ‘Mrs. Malcolm’ must possess.

Obsessively spiteful, scheming Julia summons her childhood chum, Selina Dalton (Freida Pinto), a candidly guileless clergyman’s daughter from the countryside, to London to serve as a set-up for revenge. While the outcome of this duplicity is predictable, the various courtships are charming, even endearing.

According to the press notes, Emma Holly Jones was eager to depict witty women who refused to conform to the ideas and boundaries that society placed upon them: “I wanted to reflect our society today so young brown and Black girls around the world would have their own Jane Austen-like film.”

On the Granger Gauge of 1 to 10, Mr. Malcolm’s List is a swooning, subversively sumptuous 7, playing in theaters.