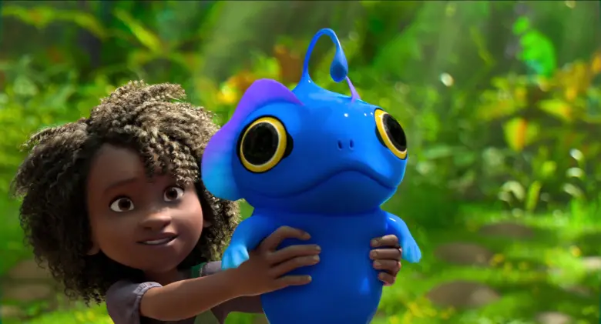 The Netflix animated film The Sea Beast bursts with emotion and texture, not just through its detailed imagery and expressive characters (human and not) but in how it questions truth and heroics. It’s a fun adventure that deserves a tip of the hat for satisfying depth and nuance.

Director Chris Williams (Big Hero 6, Moana) frames action sequences so that even young viewers can follow the tension and payoffs. Yet he also has a steady hand on the themes in the script he co-wrote with Nell Benjamin (Unhappily Ever After) about a young stowaway and a monster hunter who learn their quarry is more complex than they thought.

While this sounds like familiar ground for a family film, The Sea Beast isn’t just a watery transplant of a child-and-creature coming-of-age tale like How to Train Your Dragon (which I love, by the way). Rather, it encourages learned experience and interrogating assumptions—and why some might benefit from pushing other ideas.

Pretty weighty stuff, but it goes down smoothly amid visual humor and thrilling clashes between kaiju-like beasts and the hunters who make their living killing them.

The Sea Beast tosses viewers right into the fray with an all-hands-on-deck battle against a monster with a Nautilus nose and snapping tendrils like grappling hooks. While that creature is formidable, it’s small potatoes to Captain Crow (Jared Harris, Chernobyl) and his crew of The Inevitable. Like Moby Dick’s Captain Ahab, Crow fixates on something bigger, “The Bluster,” a red behemoth that cost him his eye.

For generations, such beasts and humans have been at war, filling orphanages with children whose parents died aboard hunting ships. Some, like Jacob (Karl Urban, The Boys), find a new family among a crew like Crow’s, a multiracial group of men and women determined to “live a great life and die a great death,” as their songs and storybooks say.

Maisie (Zaris-Angel Hator, Morbius) is another young orphan in love with such stories. When she stows away aboard The Inevitable, eager to make her mark, the compassionate Jacob wants to drop her at the nearest port out of harm’s way. But Crow admires her “vinegar.”

Maisie soon discovers real-life hunting is nothing like her stories. When she and Jacob wind up overboard, they get to know the Bluster and other beasts better.

To say more would spoil the charm of their interactions with these creatures, including a blue handful that resembles an axolotl and an anglerfish. While Maisie wants to adopt that one, the Bluster is no one’s pet. Majestic and amphibious, it plows through a beach much like the waves with a fin like a sail on its head and glinting yellow eyes. Seeing how fierce it is, Maisie’s fear turns to admiration, wondering that maybe it’s not the aggressor here.

Hator gives Maisie a child’s openness and determination; Urban channels Jacob’s frustration and doubts, and the animation reflects him believably coming around to Maisie’s point of view.

The art department, visual effects crew, and animators render the beasts and the human characters with beautiful detail, from the carved figurehead of The Inevitable to Maisie’s natural curls and the stitching on the jacket of First Mate Sarah Sharp (Marianne Jean-Baptiste, Homecoming). Colors in these scenes really pop, from a purple crab’s fangs to the palace’s gold trimmings, but the filmmakers create soulful moments too. When the Bluster glides past a glowing school of jellyfish, the wondrous sight illuminates the wreckage of ships and monster bones on the sea floor. So much loss—and for what?

Such scenes spur Jacob’s reflection and ignite Maisie’s righteousness. In a kingdom where people don’t question what they’ve always done, it’s no small thing to have a young girl of color challenge the status quo—with solid support behind her.