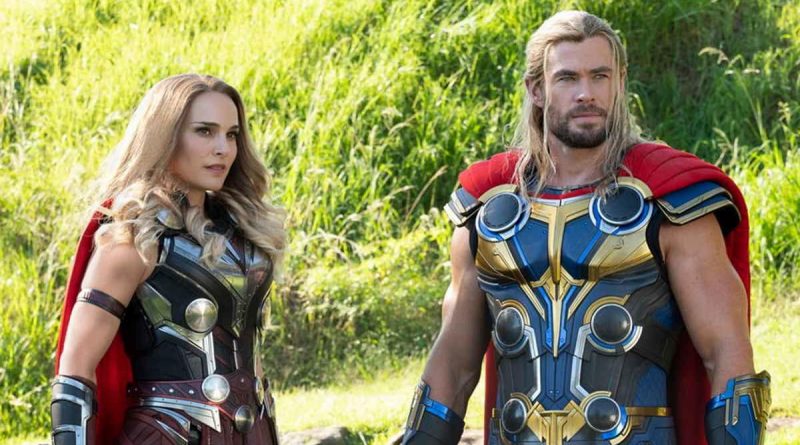 Thor: Love and Thunder has the verve of a glam-rock musical, full of Guns N’ Roses riffs, bursts of lightning, and technicolor travels along the Rainbow Bridge. But its core is the tender idea that we all crave and need love, even if it hurts to lose it.

Taika Waititi (Jojo Rabbit), who blasted new energy and humor into the staid superhero with 2017’s Thor: Ragnarok, returns at the helm of this often-loopy vessel and still loves absurdity. Yet the humor works better here. The sentimental moments have more room to breathe instead of being undercut with bathos, and the feelings hit the right notes. It’s like a valentine’s gift in summer.

Last seen jetting off with the Guardians of the Galaxy after the events of Avengers: Endgame, Thor (Chris Hemsworth, Spiderhead) is back in shape physically but emotionally a mess. He’s experienced a lot of loss, and even if he’s not hiding his hurts behind food and video games, he’s not connecting with anything genuine. The God of Thunder tries mediation and showboating, earning eyerolls from the Guardians and the nickname “god of destruction.”

Even so, Star-Lord (Chris Pratt, Jurassic World Dominion) recognizes a lost soul when he sees one. When Thor gets a distress call from Asgardian warrior Sif (Jaimie Alexander, Blindspot), Star-Lord suggests Thor find the people he loves, not hold them at arm’s length.

That theme gives Thor: Love and Thunder something earnest to say and a pretty good way of conveying it. Before catching up with Thor, though, the film introduces its antagonist, Gorr, whom Christian Bale (Ford v Ferrari) makes relatable and formidable. In an arid wasteland, Gorr cradles his dying daughter, begging the gods for water. They dismiss his grief, saying there’s always another acolyte, so he sets out to destroy them all. What’s the point of gods, he reasons, if they ignore the people who need them?

Meanwhile, back on Earth, Jane Foster (Natalie Portman, Vox Lux), Thor’s former girlfriend, muses about magic. An astrophysicist, Jane now has cancer that chemotherapy can’t touch. She takes a leap of faith to New Asgard, the Netherlands community where the survivors of Thor’s home world live. Shards of Thor’s enchanted hammer Mjolnir call to her.

Once Thor drops back to Earth on Gorr’s trail, he reconnects with his buddy Valkyrie (Tessa Thompson, Westworld), a warrior turned king of New Asgard, and discovers another Thor ready to help: Jane, resplendent in armor and wielding the hammer made whole.

The script by Waititi and Jennifer Kaytin Robinson (a producer on the Marvel Studios series Hawkeye) sets up a lot in the first act but cleverly brings viewers up to speed. New Asgard’s thespians (cameos best not spoiled) ham-handedly reenact relevant backstory while Korg, the craggy Ragnarok gladiator that Waititi voices, fills in others.

Korg tells the local children how the “space Viking” who is “sensitive like a smile” fell in love with Jane. Wondering how they’d make this relationship work nudged them apart, and the distance grew as each threw themselves into saving the world in their own way.

How Jane comes to wield the hammer that only the worthy can lift involves a sweet twist, although to its credit, the film doesn’t use Mjolnir as a cure. It imbues Jane with mystical strength and flight, but it accelerates her cancer, following a Marvel comics storyline. This gives the reunited lovers a dilemma, especially when Gorr, using a bewitched sword that feeds his need for vengeance, proves too powerful for Thor to face alone.

Hemsworth plays Thor as a dimmer bulb than in 2011’s Thor and 2013’s Thor: The Dark World, with speeches of metaphors that miss the mark, but the lighter touch gives him and Portman more chemistry. He too was as self-absorbed as other gods, including Russell Crowe (True History of the Kelly Gang) as a grandstanding Zeus. Yet Thor found humility because of Jane, making their renewed romance feel earned and endearing.

Between the battles, including one in black and white set in a “shadow realm,” Thor: Love and Thunder includes lots of blink-and-you’ll-miss-them sight gags, chatty banter, and Thor yearning to hold Mjolnir again, just to see if he has the right stuff. (His ax, Stormbreaker, actually becomes jealous.)

The rock score, sparkly armor, and production design, especially in Zeus’s realm, call to mind 1980’s Flash Gordon in a retro-affectionate way, but the film never lets the lightning overshadow its heart.