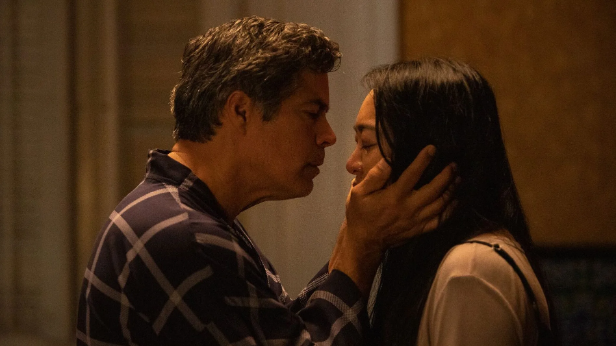 Esai Morales is a literature professor at Puerto Rico’s top university. Alone, lonely and trying to maintain a relationship with an ex-girlfriend and her child, Morales’ character – known only as “Professor” in the movie – gets an anonymously-written note delivered to him. The poetic and intelligently intriguing hand-written notes have the Professor searching and fantasizing about the person behind the pen.

Soon, he learns that a self-described lesbian student and aspiring artist Li Chao (Kunjue Li) from Puerto Rico’s immigrant Chinese community is his anonymous writer, setting the two on an erotically charged romance.

It is great to see Morales take the dramatic lead and his performance is perhaps the biggest selling point of the film. In the early scenes, his frustration at how his life has turned out and how he feels teased by the mystery writer are what gives this story its initial push before it settles into a lull. Unfortunately, his female co-stars never quite seem to match the intensity and skill he brings to his performance, often leaving their interactions feeling amateur and devoid of true emotion.

In addition to Morales, setting the film in Puerto Rico is a positive for the story. It is not often we see the Caribbean Island presented as the backdrop for a film like this.

Ultimately, Art of Love fails to deliver on its promise, leaving viewers yearning for a successful return to the genre.