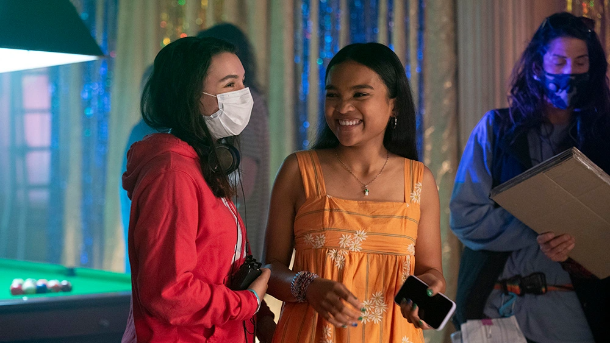 Directed by Hannah Marks from Vera Herbert’s script, Don’t Make Me Go is an extraordinarily smart, uplifting and heartfelt movie that combines coming of age tropes with unusual roadtrip elements as it revolves around a truly loving father and daughter relationship that’s put under severe pressure because of health issues. Mia Isaacs plays the teenage daughter of single parent Jon Cho, and their family chemistry shimmers on the screen as they drive across the US. racing to forge a plan for the future. AWFJ’s Pam Powell, who cheers this film as her favorite of the year, claimed the absolute pleasure of sitting down with Marks and Isaacs to discuss the film and the highlights of making it. Here’s what they had to say.

Pamela Powell: Thanks so much for joining me to talk about this incredible new movie that just happens to be my new favorite movie of the year, Don’t Make Me Go. Hanna, I want to start with you. What was it about the story that was written by Vera Herbert that really connected you to the content?

Hannah Marks: I loved that it was a father-daughter story. I thought it was so beautiful and there really aren’t very many father-daughter stories out there which is surprising because of what an important special relationship it can be. It felt like a great way to pay tribute to my own dad and our relationship. And also, hopefully make something that lots of other people can relate to and empathize with.

PP: Mia, this father-daughter connection that Hannah is talking about is the crux of the movie. Tell me about creating that special bond, that chemistry with Jon Cho.

Mia Isaacs: I don’t think at the time I was nearly experienced enough to consciously say, let’s create this bond. I think I was going into it a little nervous because it was my first movie. I looked to Jon for guidance and really, when it comes to that father-daughter bond, I really just have to thank him because he showed me a lot of love on the shoot. I also have to thank Hannah because she put us in a lot of really great situations– she’d have us play road trip games in the car and it was really great to just help us get closer and to have fun. They made it easy.

PP: I can see that! It comes across on the screen! Talking about that road trip, what were some of the obstacles or the logistical issues that you experienced?

HM: We had a lot of those. We shot in New Zealand. It’s an American summer road trip movie which we shot in New Zealand’s winter so there were a ton of hurdles especially because they drive on the other side of the road and left hand drive cars are illegal there. There were many more hurdles than the typical road movie. Thankfully we had a great local cast and crew who were incredibly helpful with trying to make it all happen, but it was no joke!

PP: Mia, your dad is teaching you how to drive in this movie. Tell me about the logistics of that!

MI: Oh, gosh! The way we did it was really fancy! We had a stunt driver on top of the car in a little pod actually controlling the car which made the steering wheel and gas, and brakes in the car useless. So I could turn it and it wouldn’t actually turn the car so it would look like I was driving. As an actor, it felt like I was actually driving and that just helped to make the performance better versus being on like a green screen. HM: Yeah, and it looked real because it was real, it’s just the person driving had to be on top of the car but then there are timing issues to work out of course, because you have to get Mia’s hands in sync with the person she can’t see. It’s over walkie [talkie], it’ll be like 3-2-1 swerve!

MI: All the cars that are around us that we interact with were actually being driven so I could react to seeing the vans behind us getting closer, honking and I could react to those things.

HM: But those cars weren’t able to be left hand drive cars so we would have a second steering wheel for every car and then try to cover the other steering wheel with a newspaper or a jacket or another person!

PP: Things like that that definitely add a lot more to a scene! Hannah you’re on the younger side for being [already creating your] third feature film. What an incredible resume at this point in your life! Is there anyone that has inspired you?

HM: Well it changes all the time I have so many inspirations. I really love other actors turned directors so I’m a big fan of Ben Stiller and Greta Gerwig and Tina Fey, but of course there are other film makers I love like Andrea Arnold or Ava DuVernay or Mike Mills and Noah Baumbach. Those people are all huge inspirations to me right now.

PP: Mia, last question for you. What was the most fun scene for you?

MI: I think it’s funny because at the time I was probably — I was like this is the worst day. It was the day that we shot in Texas with all the cool kids in Texas, and I went to that little party with the meteor shower. It was freezing and the farm that we were shooting on was full of cow poop everywhere so we had to have gumboots to get through everything and then I had to do a keg stand which I’ve never done a keg stand before! That was new for me. And climbing up the silo! There were just so many fun things to do that night.

HM: I did drop my monitor in the manure several times and my headphones. It was kind of a nightmare but I think it looked pretty.

PP: The whole film was amazing! Hannah and Mia thank you for making my favorite movie of the year.