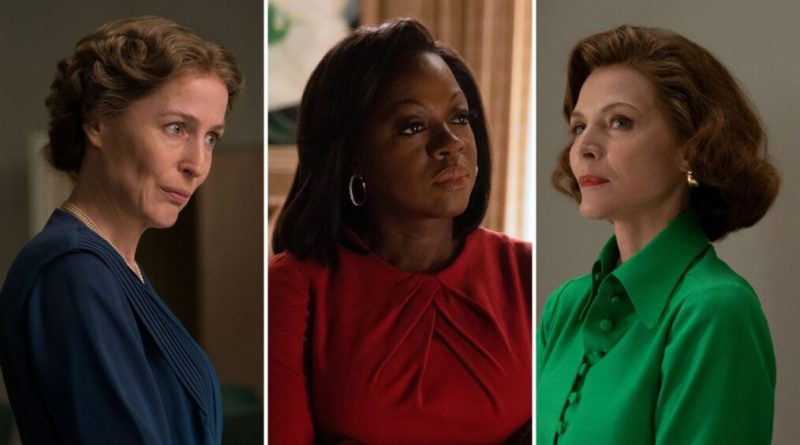 I had such high hopes for Showtime’s 10-episode series, The First Lady, particularly since, years ago, when Gillian Anderson was playing Agent Dana Scully on The X-Files in a 1997 episode titled Small Potatoes, she said that if she could be another person, it would be Eleanor Roosevelt. In this new series, Anderson plays First Lady Eleanor Roosevelt – brilliantly!

Eleanor was a visionary during the Great Depression and W.W.II, championing human rights, particularly the role of women. But her private life was, obviously, tricky to handle without being exploitive. Married to flagrantly unfaithful Franklin Delano Roosevelt (Kiefer Sutherland) and dominated by a powerful mother-in-law (Ellen Burstyn), Eleanor sought solace with journalist Lorena Hickok (Lily Rabe), who occupied a bedroom adjacent to hers in the White House.

Created by Aaron Cooley with Cathy Schulman as showrunner and stiffly directed by Suzanne Bier, the interlocking narratives, utilizing archival footage, are oddly structured, profiling First Ladies Betty Ford, Michelle Obama and Eleanor Roosevelt – before, during and after their East Wing experience.

Last – and certainly least effective – is Viola Davis’s bizarre impersonation of Michelle Obama, facing the challenge of being America’s first Black First Lady; Davis’s performance is all mimicry and make-up.

To be First Lady of the United States is not a political position but whoever holds the office is incredibly impactful and powerful. Here, because their parts are so blandly written, except for Gillian Anderson’s Eleanor, the actresses seem to be delivering impersonations, rather than characterizations, and there’s certainly no discernable controversy – which makes this historical anthology far too superficial.

On the Granger Gauge of 1 to 10, The First Lady is a scrambled 6, streaming on Amazon Prime.