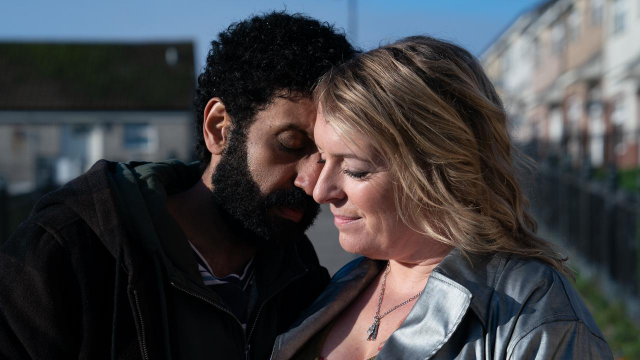 Ali & Ava is the latest film by British filmmaker Clio Barnard, one that resonates with a sweet dose of social realism set in the ethnically diverse working-class neighborhood of Bradford, England. It is also a rare middle-age romance that stars Claire Rushbrook as a widowed kindergarten teacher’s assistant who eventually romantically clicks with Adeel Akhtar’s Ali, a British Pakistani man who picks up a student whose family are his tenants, offers Ava a ride home as a downpour ensues. The pair also share a mutual love of pop music while Ali also DJs occasionally. Alas, Ali’s marriage is in the midst of crumbling while Claire’s skinhead son Callum, who lives with her while she helps with raising his baby, objects to his mom’s new companion and at one point he even threatens Ali with a saber.

Ava, a mother of four grown children and grandmother to five, is still coping with the after-effects of her last relationship with a man who abused her horribly and is now deceased. Alas, Barnard’s narrative is somewhat entangled as the storyline never quite fully heats up. But, luckily, Rushbrook and Akhtar exhibit plenty of charm, warmth and emotion together. Less a drama and more of an unconventional romantic comedy, Barnard doesn’t always fill in the blanks in her narrative. But Rushbrook provides her character with plenty of warmth while Akhtar indulges in humor. Barnard attempts to touch upon such social issues as racism, violence and domestic abuse. But in the end, it is her two stars who keep us watching.