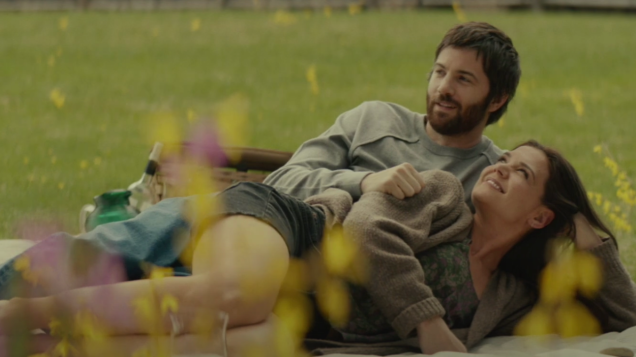 Alone Together joins a lengthy roster of films that fail to live up to promise. It’s also one of those films that calls for interrogation: Where does it go wrong? Who is to blame? How much time does it deserve in the viewing before the leaving?

The plot: The Pandemic hit in March 2020. A couple had planned to escape for a short — even romantic — getaway in the country for the week she thinks the scourge will last. When June (Katie Holmes) arrives at the Air B&B, she finds another renter. She and Charlie (Jim Sturgess) have been double-booked.

He graciously offers her the bed; and he takes the davenport. They have to share a bathroom. And, so it begins: their relationship buds into bloom. As the two B&Bers connect, Mayor Cuomo reports the growing crisis, June speaks to her demented grandfather, and Charlie connects with his mother (played by Melissa Leo, wasted in the part).

We have to reckon with a number of glitches. For one thing, the long shots of the huge house at 34 Cherry Lane show that it surely possesses more than one bedroom and one bath. Also, June finds a complete wardrobe in her overnight bag. Early on, the character June apologizes to Charlie for not wearing make-up when the actor Katie Holmes obviously is made up. We also have to reckon with the predictable opposites, for example: she’s trying to be a vegan and he buys Big Macs for dinner.

Looking for someone to blame means glancing no further than the triplicated credit: Katie Holmes not only stars in Alone Together but also wrote and directed it. Holmes is no longer the darling young woman of Pieces of April or Dawson’s Creek, both from 2003. She is now a middle-aged woman with a few credits as a director and writer as well as a respectable roster of acting roles. Her writing contains no witty banter (Holmes and Sturgess are no Hepburn and Tracey), and her directing holds little interest. Her acting offers zero chemistry with Sturgess.

This film results from delusions of grandeur. Alone Together possesses no surprises and no suspense. Only sadness.