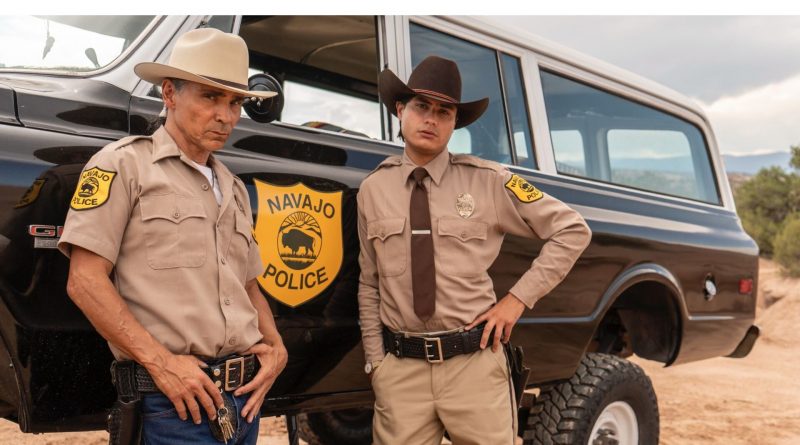 Why is AMC’s series Dark Winds so compelling? Perhaps because it emphasizes the importance of realistically depicting Indigenous people in Westerns and what it means to have an all-Native American writers’ room, along with Navajo elders as background extras.

Along with his wife Emma (Deanna Allison), Leaphorn is still grieving over the death of his only son, Joe Jr., in an explosion at a local mine. When there’s an armored car theft and murder in Stockton, California, he teams up with culturally conflicted Chee, who grew up on the Navajo reservation. Joining them in the investigation is no-nonsense Sergeant Bernadette Manuelito (Jessica Matten).

Apparently, the armored car robbery was planned and executed by members of the Buffalo Society, and the stolen cash is stored in a cave, guarded by shrewd James Tso (Jeremiah Bitsui) and escaped convict Frank Nakai (Eugene Brave Rock), who hijack a Mormon family to hold as hostages.

Series creator Graham Roland insisted on authenticity, concentrating on Navajo customs and character development. He was determined to make a show about two Native Americans who were the heroes of their own story, as opposed to being brought in by a Caucasian character.

According to Cheyenne/Arapaho filmmaker Chris Eyre, who directed four of the six episodes, clinging to a deceased son’s belongings seems natural in our culture but – for Navajos – getting rid of the deceased person’s clothing is an integral part of letting go of sadness.