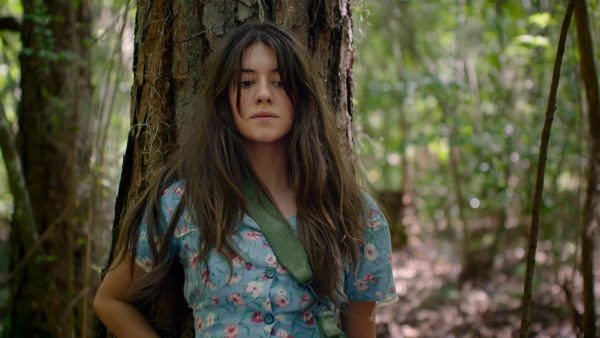 The film begins with a young man’s body, slammed down to earth from a fire tower. The film continues as a courtroom drama, flipping back and forth with the growing up of young Kya, who’s accused of the maybe murder. She grew up abandoned by parents and siblings in North Carolina in a marsh — not in a swamp or a slough, a marsh.

She bought grits to feed herself by digging then selling mussels, alive, alive, oh! to the general store, its owners served in loco parentis by dressing her from their church’s charity box. As a teen, she became friends with Tate, who teaches her to read. She also became friends with Chase, the dead man. But did she kill him? Did she love him? Or Tate?

Where the Crawdads Sing is based on a best-selling novel by Delia Owens, who created a strong young woman as protagonist. The novel runs two themes: the murder’s courtroom scenes demand attention, and the love stories add romance and hope. The many layers of plot and characterization plus the temporal, psychological, and physical settings encourage curling up and diving into the book.

Those very elements make it difficult to transfer the book to the screen, and although it never really pays to compare one medium to another, here, it’s hard not to. The book is roomier, more engaging with Kya’s voice; the film is tidier but, of necessity, writer Lucy Alibar, who wrote the script for the brilliant Beasts of the Southern Wild, skims some plot lines like a dragon fly on the water.

Daisy Edgar-Jones pulls off the roll of Kya by keeping the character shy and smart, as written. Edgar-Jones, known for her admirable work in Normal People, is complemented by JoJo Regina as young Kya. The dependable David Strathairn plays Kya’s Atticus Finch-like lawyer, and the too-often unsung Garrett Dillahunt plays Kya’s pa. They are supported by a strong cast of barely-knowns.

Director Olivia Newman handily flips the plots, back and forth, through the Sixties in the South. She also places nature front and center to tell this story of Kya, a natural naturalist. The dramatic overhead shots of Kya’s marsh open up as much as the smokey interior shots of the courtroom close in. Newman’s closing montage summarizes — and surprises — well.

Where the Crawdads Sing includes sex, shells, and snots and the Piggly Wiggly. It is a story of a determined woman, shot and written by same.